14 dead in attacks on hotel, park in Somali capital 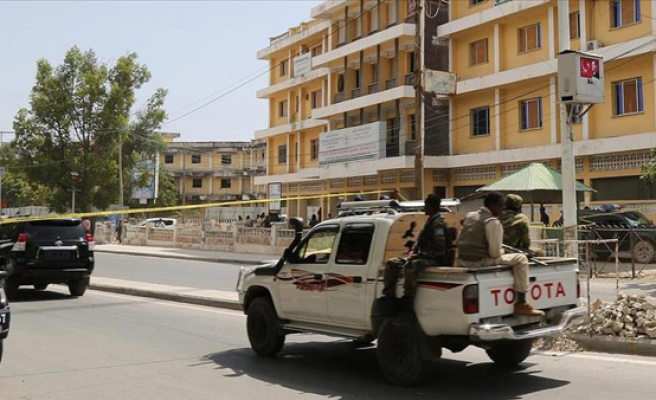 At least 14 people were killed in attacks on a hotel and public park in the Somali capital on Friday night, health officials said Saturday.

Another 25 were injured in the bomb and gun attack on the Somali Youth League hotel and a car bombing of the nearby Peace Garden, both claimed by al-Qaeda-linked al-Shabaab.

A car packed with explosives was rammed into the hotel entrance before gunmen exchanged fire with hotel guards at around 7.45 p.m. local time (1645GMT), according to the Shabelle Media Network radio station, which claimed more than 20 soldiers and civilians had been killed.

The car bomb was detonated at the Peace Garden around 30 minutes later, the station reported.

The wounded were taken to the Medina Hospital in Mogadishu, where Dr. Muhammad Sheikh said the car bomb had caused most casualties. Four militants were killed in the attack, he added, and another was killed in the car used in the hotel attack.

The hotel is situated near the presidential palace in Mogadishu and is popular with government officials, journalists and business executives.

Al-Shabaab has continued to launch attacks across the Horn of Africa despite being forced to retreat by government forces and African Union peacekeepers.

Last month the group attacked Kenyan troops based in Somalia, claiming to have killed more than 60 soldiers. It has also carried out deadly attacks on neighboring countries, most notably the Kenyan university attack last April that killed 148 and the 2013 assault on a Nairobi shopping center that killed 67.