"We are behind the two car bombs driven by mujahideen (fighters)," the spokesman for al Shabaab's military operations said. 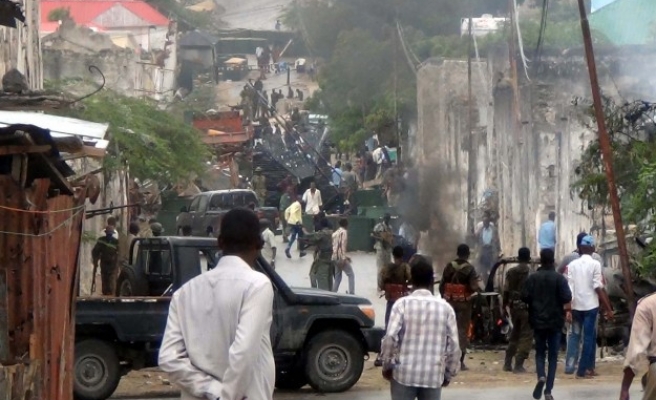 At least 25 people were killed in a suicide bombing that targeted African peacekeepers in Somali capital Mogadishu on Monday, security sources and eyewitnesses said.

"A car laden with explosives rammed into two convoys of the African Union Mission in Somalia (AMISOM) in northwestern Mogadishu," a security source told Anadolu Agency.

It remains unclear whether those killed were civilians or African peacekeepers.

At least another 30 people were injured in the attack, for which the Qaeda-linked Al-Shabaab group has since claimed responsibility.

Wednesday's attack was the first of its kind since Al-Shabaab commander Ahmed Abdi Godane was killed last week in a U.S. drone strike.

In the wake of Godane's death, Al-Shabaab threatened to carry out retaliatory attacks on state institutions across the country.

Established in 2004, Al-Shabaab has battled the government for control of territory throughout Somalia.

The Somali government and African troops have launched a massive military operation against Al-Shabaab – dubbed "Operation Indian Ocean" – which has cost the militant group most of its strongholds, except for the port of Barawe.

The port is believed to be Al-Shabaab's main source of revenue, generating millions of dollars from the illegal sale of charcoal to the Middle East.

Somalia's Al-Shabaab group claimed responsibility for two car bomb attacks on Monday targeting African peacekeepers and a government convoy, the first such strikes by the group since it vowed revenge for the killing of its leader last week.

The blasts within an hour of each other on the same road southwest of Mogadishu targeted a convoy of African Union (AU) troops and a Somali government convoy of police and national security forces. Civilian buses near the first blast were hit.

Al-Shabaab appointed a new leader at the weekend after U.S. missiles killed his predecessor Ahmed Godane and said the group's enemies would reap "bitter fruits" of revenge.

Abdikadir Mohamed Sidi, governor of the Lower Shabelle region south of Mogadishu, told Reuters by telephone he was driving behind the AU convoy at the time of the first blast and saw three civilian vehicles in the same area.

He said more than 12 people were killed in one minibus. Two African Union soldiers were injured in that attack, about 20 km (13 miles) from the capital.

The rebels said four Americans and a South American were among those killed in the attack on the AU convoy. There was no official confirmation. Al-Shabaab's figures and details it gives of those killed often differ markedly from official accounts.

"It is a disaster. The flesh of the people was mixed up and stuck to the tarmac road and the debris of the vehicle," said Major Hussein Ahmed, a senior police officer, describing the scene near the African Union convoy where minibuses were hit.

More than two dozen others were wounded in that first blast, including two African soldiers, the governor said.

A Reuters witness saw an AU vehicle being towed and the burned remains of passengers inside one of the minibuses.