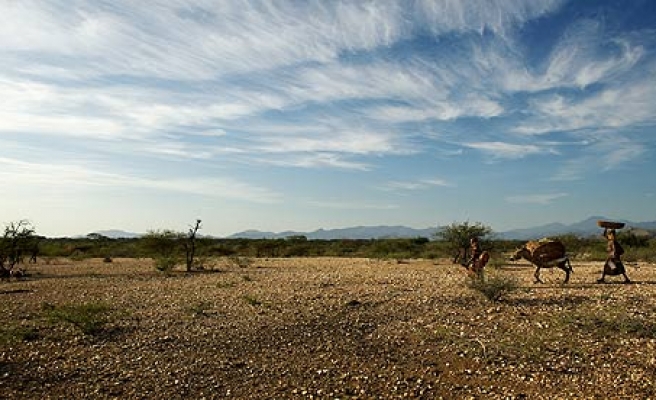 World Bulletin / News Desk
At least three elderly people are thought to have died in a Kenyan northern arid region hit by drought and hunger, even as the government began trucking tons of relief supplies to the area.

The deaths were reported in West Pokot, in the North Western Region - the worst affected area, as hundreds of families with livestock migrated to other areas in search of food and water.

"Most elderly people are too weak to move out of their homes in search of food, or to reach the relief food distribution centers being set up by the government," local administration official Jackson Runei told the Anadolu Agency by phone.

He said relief supplies were yet to reach many areas of the vast arid north due to poor infrastructure, adding that the situation is worsening by the day.

"Even the wild fruits that we used to rely on during droughts are no more and there is no water for livestock," he said. "We need urgent help."

Pokot Livestock Keepers Chairman Henry Losikiraitum said most families were moving away from the area towards Lonyek in neighboring Laikipia and the Turkana border as they search for water and pasture for their cattle.

"Most households have no food and the situation may get worse in the next few weeks unless... the government and other agencies arrive quickly," he told AA.

Another resident Jeremiah Chamakany told AA that learning had been disrupted in many schools as the school feeding program had been affected.

He added that some children were moving away with their parents.

In Turkana County, one of the worst affected areas, some families were crossing into neighboring Uganda.

However, by Saturday, efforts had started by government officials and relief agencies to provide relief supplies to the region, and some affected families were already receiving rations of food, water and medicine.

The government has announced a massive effort to try to mitigate the effect of drought and hunger which it estimates affects 1.7 million people in 23 administrative regions.