7 dead at mob attacks U.N.-protected camp in I. Coast

The U.N. did not comment on how the attack took place despite the presence of the peacekeepers and the United States called for an immediate enquiry into the events. 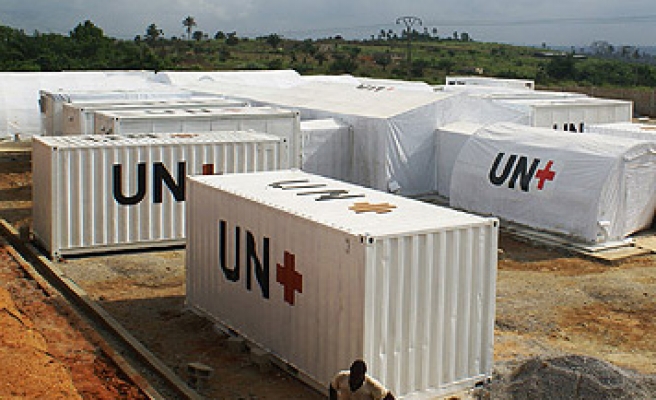 At least seven people were killed and dozens injured on Friday when angry mobs set fire to a U.N.-protected camp for civilians forced from their homes in western Ivory Coast, underscoring tensions in the zone.

The United Nations said the attack on Nahibly camp - an apparent revenge attack for an overnight robbery in the nearby town of Duekoue that killed five - forced 5,000 people to flee.

Those in the camp were Ivorians who fled their homes during last year's civil war. While much of the country is rebounding from the conflict, Friday's attack is the latest in a string of incidents highlighting tensions linked to land and ethnicity in the west, near the border with Liberia.

"The (U.N.'s) representative would like to underscore, once more, the seriousness of the situation in the west of Ivory Coast," the world body said in a statement on Friday evening.

The U.N. said seven people had been killed and 13 injured.

"(They) arrived this morning and started to chase us from the camp and set it on fire. They killed three people in front of my eyes, and so I fled with my son," camp resident Murielle Kapes told Reuters by telephone.

Another witness who entered the camp in the late afternoon counted eight bodies, some of them burned beyond recognition.

A source at the main hospital in Duekoue said more than 40 people had arrived from the camp with injuries mainly caused by machetes and wooden clubs. Five had been shot.

The camp, the country's only remaining facility for those displaced by last year's war, is managed by the United Nations and partner agencies. A detachment of armed peacekeepers from Ivory Coast's U.N. peacekeeping mission, UNOCI, was deployed outside Nahibly to protect the camp's residents.

The U.N. did not comment on how the attack took place despite the presence of the peacekeepers and the United States called for an immediate enquiry into the events.

"The United States urgently asks that the Ivorian government and UNOCI take immediate measures in order to assure the protection of civilians in the region," the U.S. Embassy said.

Residents of the town told Reuters the attack on the camp was a response to an attack during the night by gunmen on a neighbourhood not far from the camp.

"Everything is on fire. ... It's horrible. I don't have words," another witness said, asking not to be named.

Many of the camp's residents fled into Duekoue to seek shelter at the Catholic mission there, which a local priest said had also been threatened by crowds of angry youths.

Duekoue, at the heart of some the country's richest cocoa farmland, has long been a flashpoint for ethnic violence aggravated by disputes over land ownership. Human rights investigators say around 800 people were massacred there during last year's conflict.

The border zone has remained the most sensitive part of the country since post-election clashes ended in April of last year.

Many fighters loyal to former president Laurent Gbagbo, whose refusal to cede power despite losing a 2010 election sparked the conflict, crossed into Liberia. Rights groups accuse them of having since launched a series of cross-border raids.

The U.N. estimates there are some 86,000 still displaced in Ivory Coast, mostly living with host families.