On several occasions, aid workers in Sourh Sudan find themselves stuck in the middle of the fight between government troops and rebel forces 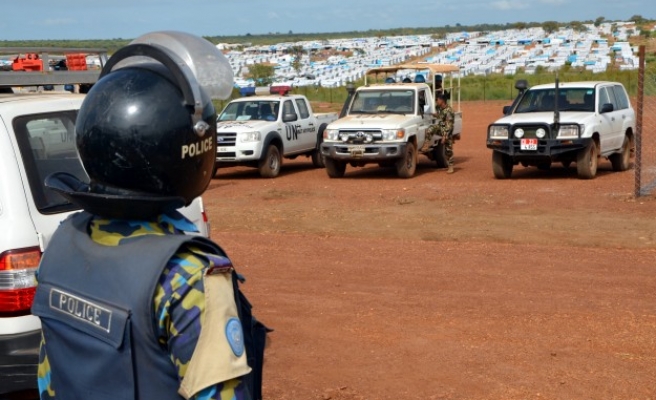 Conflict continues to rage in South Sudan, displacing hundreds of thousands of people and leaving many hapless residents without desperately needed food and medicine.

For hundreds of thousands of displaced South Sudanese, humanitarian aid from foreign organizations and agencies is the only hope.

Aid workers, however, are finding themselves stuck in the middle of the fight between government troops and rebel forces.

In August, Michael Swanki (not his real name) had been working for the Danish Refugee Council, an international NGO, in Upper Nile State's Maban County when violence against aid workers broke out, leading to the evacuation of more than 200 aid workers from the area by the UN mission in South Sudan.

As a result, Swanki had to quit the job altogether.

"The situation was becoming very heated, so I decided to come back to Juba until things returned to normal," Swanki told The Anadolu Agency.

"I was not stopped from working, but I decided to leave because the situation was becoming unbearable," he recalled.

On August 5 and 6, Swanki was at the center of attacks on aid workers, when a militia group calling itself the Mabanese Defense Forces targeted aid workers of the Nuer ethnic group.

At least six of the latter were killed in Maban over two days, according to the UN.

"Aid workers were always moving out to the field," Swanki said. "It was very hard because, on the roads and in areas where the camps were, everybody had a gun."

He said government officials would stop vehicles every now and then and search the passengers inside.

"They would stop the vehicles and begin asking where the passengers were going," Swanki said.

"Some of us were sometimes told to come out; they would ask us seriously before letting us enter the car," he added. "I became afraid of the soldiers and just left work."

Aid workers were targeted numerous times over the course of the war, which has raged for almost one year now. Gunmen shot down a UN helicopter on August 26, killing two Russian airmen and injuring a third.

On October 16, a staff member with the World Food Program, Mark Diang, was captured by a group of militants at Malakal airfield as he prepared to board a UN plane. He remains missing more than one month later.

Earlier, on October 10, three individual contractors employed by the UN Mission in South Sudan – who had been working at the airfield in Malakal – were captured by a group of militants.

Two of the three workers were freed the following day, while the third is still missing until now.

South Sudan's one-year-old conflict, which began as an internal dispute within the ruling Sudan People's Liberation Movement, has displaced almost 2 million people and left 4 million others in need of assistance.

Aid agencies say both sides of the conflict have looted UN warehouses stocked with food and medical supplies. NGOs have reported similar abuses.

Aid workers must also deal with frequent flooding, bad roads and the vast distances between the country's affected communities.

Priscah Obara is a nurse from Kisi in Kenya's Nyanza Province who has worked on the Pamat health program since July 18.

The Pamat program, launched by international health organization Doctors without Borders, is being carried out in Aweil North County in Northern Bahr el Ghazal State.

"One of the challenges we face is making sure we reach the target population," Obara told AA.

"There is a big problem of accessibility," she added. "In general, there are no roads, making it hard to reach the people who need help."

She went on to say that the distances between health centers – most of which are ill-equipped – and population centers was hindering aid deliveries.

"Primary healthcare centers are sometimes far from the population, while many lack drugs and human resources," Obara lamented.

She noted that Doctors without Borders had a referral system replete with vehicles and donkey carts, but complained that staff members like her could not be everywhere all the time.

"So patients receive treatment at private clinics where there is no well-trained medical staff," she said, adding that medical staff at many of the clinics often failed to offer patients the correct treatment.

Despite these challenges, Obara's colleagues have kept her going.

"I get a lot of motivation from my colleagues," the Kenyan nurse said. "If I have challenges, I share them with my colleagues so they can support me with their advice and we can find a solution together."

At least 13 UN workers have already lost their lives. Others have disappeared or been taken hostage.

"If you are less courageous, you will give up. But many have stayed because they believe the work is needed," Kyung-wha Kang, the UN's assistant secretary-general for humanitarian affairs and deputy emergency relief coordinator, told AA in an interview held in Juba.

"It mostly has been with our national [i.e., South Sudanese] partners, national staffs and NGOs," Kang said.

"Because of the ethnic identity of the national staffs, it is difficult for them to work in some areas. This has led to a huge number of challenges," she added.

Kang went on to stress, however, that – despite the attacks on aid workers – aid operations had been successful.

"As difficult as it was, we really saw food insecurity dipping, so we sounded the alarm," she said. "We regrouped, prioritized and really came together to avert a famine."