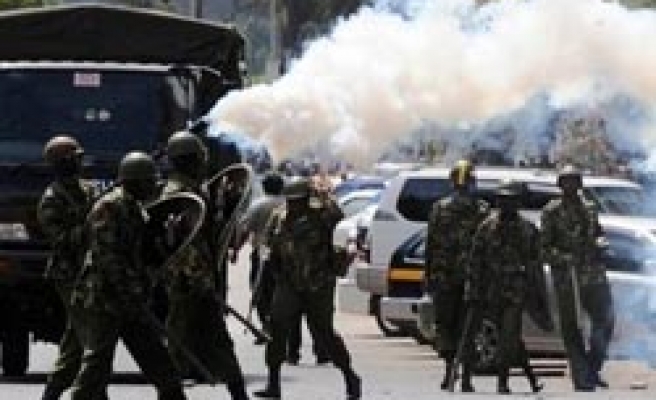 Somali al Shabaab militants killed 36 workers at a quarry in northeast Kenya, they said, beheading at least two of them in the same area that they hijacked a bus and killed 28 passengers a week ago.

A village elder at Korome, near the site of the attack, said gunmen crept up on dozens of workers as they slept in tents around the quarry at about 1 a.m. (2200 GMT).

"The militia separated the Muslims, then ordered the non-Muslims to lie down where they shot them on the head at close range," Hassan Duba said.

A witness at the scene said most victims were shot in the head and at least two were beheaded. He counted 36 bodies at the quarry, about 15 km (10 miles) from the town of Mandera.

Kenya's government confirmed 36 people were killed in the quarry assault and cited survivors saying about 20 attackers were involved. Investigations were underway into that attack and another on the northern town of Wajir late on Monday in which one person was killed, it said in a statement.

The Nov. 23 bus attack also took place on the outskirts of Mandera near the Somali border. In that case, militants ordered non-Muslims off the bus and shot them while sparing Muslims.

As with past attacks, al Shabaab militants said they were punishing Kenya for sending troops to join African peacekeepers. In a statement, it put the death toll at 40 people and called them "Kenyan crusaders".

"We are uncompromising in our beliefs, relentless in our pursuit, ruthless against the disbelievers and we will do whatever necessary to defend our Muslim brethren suffering from Kenya's aggression," spokesman Ali Mohamud Rage said.

Opponents say the presence of Kenyan troops has not protected Kenya and so they should be withdrawn.

"They were supposed to create a buffer between our countries and the chaos on the other side. But it has not done that. So we are saying leave," Dennis Onyango, a spokesman for opposition politician and former prime minister Raila Odinga, said.

Since the Westgate attack, Kenya has suffered from a string of gun and bomb attacks on the coast, in the capital Nairobi and along the long porous northern border with Somalia.

The government typically blames al Shabaab and has promised to step up security, but the public has grown increasingly frustrated and, after the Mandera bus attack, small protests have been staged demanding action.

"It is sad that we have another 36 people who were attacked and killed late last night in the same manner it happened on a bus recently," Mandera county governor Ali Roba said.

Roba has also been critical of what he sees as government inaction on security in his area.

Following the bus attack, Kenya said it responded by killing more than 100 al Shabaab militants in Somalia. Al Shabaab has denied the claim.

News of the quarry attack sent the Kenyan shilling lower against the dollar early on Tuesday.