After passing a decree to dissolve the Department of Intelligence and Security (DRS). a new organisation will be created with a new leadership composed of Bouteflika loyalists, including former security adviser Athman Tartag reporting directly to the president. 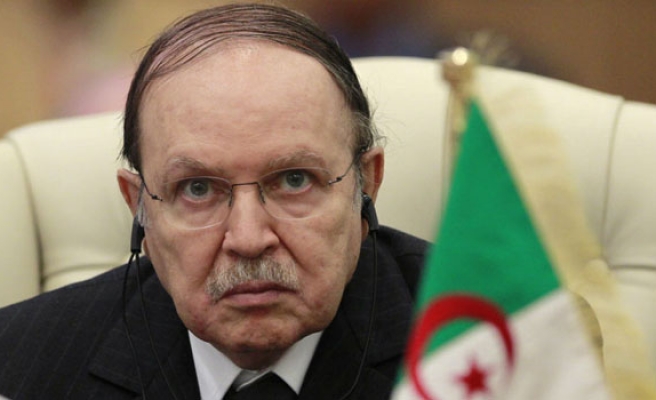 Algeria's parliament is to meet from Wednesday to adopt a draft revision of the constitution limiting the number of presidential terms to two, the presidency said.

A statement said President Abdelaziz Bouteflika signed a decree to that effect on Saturday.

The revision would restore the two-term limit which was suppressed in 2008.

This enabled Bouteflika, first elected as president of the oil-rich North African state in 1999 and re-elected in 2004 for another five-year term, to stand again in 2009 and 2014.

The 78-year-old appeared just once during the campaign for the 2014 election, in a wheelchair after suffering a stroke the year before.

Public appearances by Bouteflika are rare, and he appears on local television only when foreign dignitaries visit.

Introducing the draft revisions this month, Bouteflika's chief of staff Ahmed Ouyahia said that in 2008 the president had responded to a call by the people to remain in office.

The announcement of his candidacy in 2014 gave rise to protests organised by the Barakat ("Enough") movement.

The constitutional revision would also boost the status of the Berber dialect Tamazight to official language and also prevent Algerians holding more than one nationality from standing in elections for public office.

This has angered many Algerians in France who are citizens of both countries.

Also on Saturday, the presidency confirmed the creation of a new intelligence organisation following the dissolution of the powerful Department of Intelligence and Security (DRS).

"The DRS has been dissolved and replaced by three security branches reporting directly to the presidency," Ouyahia said.

Retired general Athman Tartag, an ex-security adviser to Bouteflika, is to head the new DSS.

He was named in September as successor to longtime DRS chief General Mohamed Mediene -- better known as General Toufik -- head of a shadowy intelligence service that many viewed as a "state within a state".

The move places the entire security apparatus under Bouteflika's direct control, with Tartag reporting to him on the activities of all the country's intelligence services.