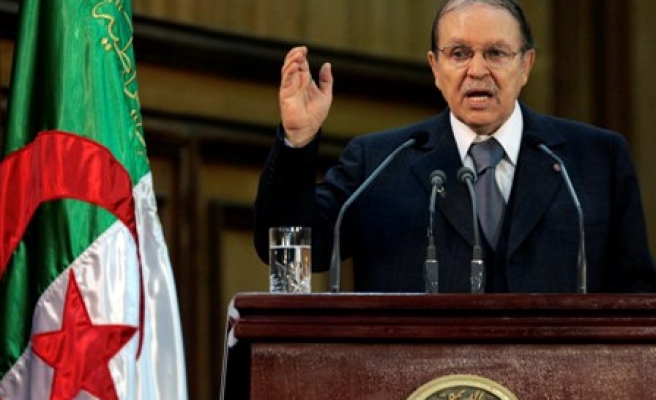 Algerian President Abdelaziz Bouteflika on Monday formally registered his candidacy for April's election, one of the few times the aging independence veteran has spoken in public since suffering a stroke last year.

Bouteflika's registration at the Constitutional Council - a formal step for his candidacy - ended months of speculation over his intentions. But opposition leaders say they believe the president, who just turned 77, is still too weak to run again after a decade and a half in power.

Algerian state television showed Bouteflika smiling at seated at a table to sign a document at the council, where he handed in petitions for his candidacy for a fourth term.

"I am here to register according to electoral law," Bouteflika said.

Earlier a private television channel which is close to the presidency showed him arriving in a limousine.

Algeria's prime minister announced a week ago that Bouteflika would run again, with loyalists praising the president as the man who can provide stability after helping bring Algeria out of its 1990s civil war.

Even if he is still recovering, Bouteflika is almost assured of a win in the April 17 vote with the backing of the ruling National Liberation Front (FLN) party and its allies which, along with the military, have dominated politics since the North African state won independence from France in 1962.

Since he has rarely been seen in public since returning from France last year after months of hospital treatment, opposition parties say there are still doubts about his health.

A second hospital visit for checkups in January stirred another round of succession speculation.

But opposition parties are weak and fractured, and lack the powerful machinery of the FLN and support of the military.

Five main candidates will run for the ballot, including one woman. Bouteflika's main competitor will be Ali Benflis, a former ruling party leader and prime minister.

In the short term, another Bouteflika mandate means stability for a major European energy supplier and partner in a U.S.-led campaign against militants in a region facing unrest after the 2011 revolts in other North African nations.

Oil companies are keen to see what terms will be on offer in an energy bidding round later this year, and the OPEC member needs reforms to entice investors after years of centralised state control.

Since returning from his Paris hospital stay last year, Bouteflika has moved to strengthen his hand in the backroom tussles with the chief of Algeria's powerful DRS military intelligence agency, who has long played political kingmaker.