Jonathan, a Christian, is contesting elections next February for a second term in office 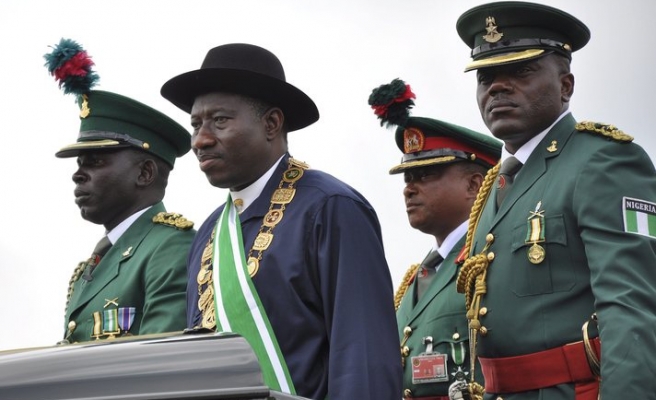 A Nigerian presidential spokesman has drawn the ire of the public after comparing President Goodluck Jonathan to Jesus Christ.

"People do not understand the burden this president is bearing," presidential spokesman Doyin Okupe said in televised comments on Monday morning.

"He's like Jesus Christ. He is bearing the burden of everybody," he asserted.

Barraged with criticism of his handling of the country, Jonathan loyalists have consistently sought to clad him in the garb of historical figures, at times likening him to late South African liberation icon Nelson Mandela, U.S. President Barack Obama and slain American civil rights advocate Martin Luther King Jr.

Many Nigerians immediately turned to social media platforms to vent their anger at the spokesman's "Christ" remark.

"Truth be told, if it were a Muslim that compared GEJ [Jonathan] to our dear Jesus Christ, our fellow Christians would have been ranting now," online commentator Yetunde Ogunde tweeted.

Kayode Ogundamisi, a political commentator, said Okupe's comment was a "desperate attempt" to court Christian votes ahead of 2015 presidential polls.

Jonathan has been endorsed by the ruling People's Democratic Party as its sole candidate for the February 14 race.

His main challenger will be Muhammadu Buhari, a former military ruler who will be running on the ticket of the All Progressive Congress, Nigeria's main opposition party.

A Muslim from northern Nigeria's Fulani ethnic group, Buhari is referred to by his supporters as "Mai Gaskiya," a Hausa term meaning "honest man."

Ogene Adaobi, another upset Nigerian, berated the presidential spokesman for "whipping up religious sentiments which are bound to fail."

"It is an insult to start likening Jonathan to Christ in the first place," he tweeted. "Nigerians can see through the desperation behind this. It won't work."

Though no official figures are available, Muslims are estimated to account for over 50 percent of Nigeria's population, Christians 40 percent, and animists and followers of indigenous beliefs 10 percent.

Christian groups, however, dispute these figures.

Religion is a sensitive issue among most Nigerians, who have been described as some of the most religious people in the world.

Some critics say that Nigerian politicians like to exploit the Muslim-Christian divide to achieve political objectives.

In 2011, religion is thought to have played a key role in the outcome of elections – religion coupled with mass poverty and low education among millions of voters in the hinterlands.

With Nigerians – especially the young, who tend to focus more on development issues – it is too early to say whether religion will be as much of a factor in the upcoming election as it has been in previous polls.