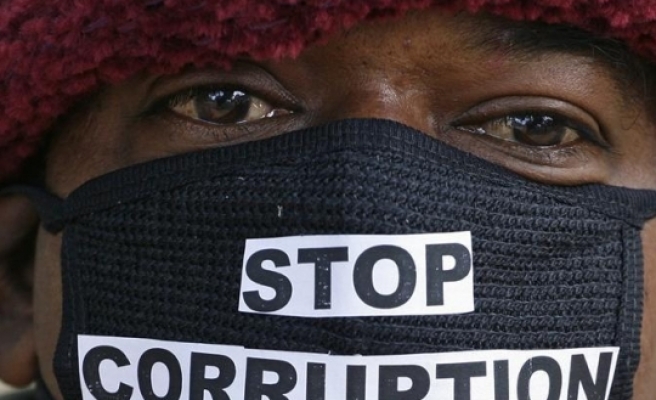 Thousands of South Africans took to the streets on Wednesday to protest against corruption, as public frustration grows over a government enmeshed in graft scandals and a stagnant economy.

The ruling African National Congress (ANC) led the fight to end white-minority rule, but after 20 years in power there is widespread pessimism that the benefits of democracy have only reached a small elite.

Organisers hope the march, held in Pretoria and Cape Town, will be the start of a broad civic movement campaigning against corruption in the government and public services.

Tutu, a frequent critic of the post-apartheid government, pledged his support for the event, but was unable to attend due to recent ill-health.

"Apartheid stole the past, corruption steals our future," read one banner as about 2,000 protesters marched to parliament in Cape Town.

Another said: "Our parents fought apartheid, now we fight corruption."

President Jacob Zuma has been the chief target of anger, with $24 million (21 million euros) of improvements to his private residence becoming a symbol of alleged government misspending.

Youth unemployment is estimated at 50 percent in South Africa, and economic growth has slowed to two percent this year.

The march was smaller than organisers hoped after the government refused unionised workers the right to strike for the day.

"They've made things difficult for us, but I don't think they have done themselves any favours," said David Lewis, executive director at the non-profit organisation Corruption Watch.

"In a democracy when people talk, they expect to get heard, and then they talk louder."

On Tuesday, the ANC was forced to deny US charges that it took improper payments from Japanese construction company Hitachi in connection with the construction of multi-billion-dollar power plants.

Another national anti-corruption march has been planned for October 14.