Nearly 100 youths gathered in the square quietly before breaking out into a flash mob chanting slogans against the military and the interior ministry. 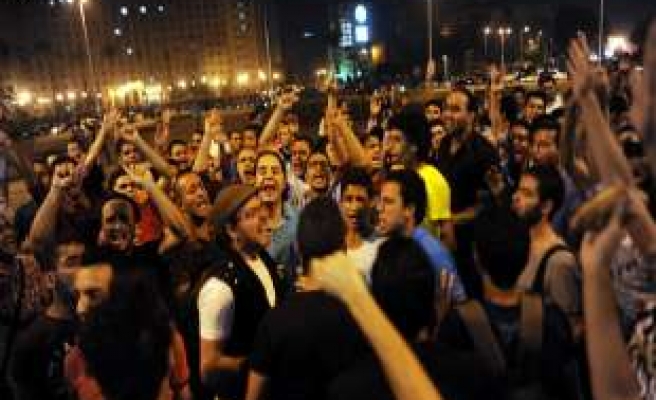 Scores of anti-coup activists staged late Tuesday their first ever protest in Tahrir Square since the ouster of elected President Mohamed Morsi, before being dispersed by security forces.

Tens of protesters converged on the iconic square earlier this evening in response to online calls to stage a surprise protest.

Nearly 100 youths gathered in the square quietly before breaking out into a flash mob chanting slogans against the military and the interior ministry.

"Military coup is terrorism" and "down down with military rule," chanted the young protesters, many of them holding the now-iconic yellow Rabaa sign.

The four-fingered salute has come to symbolize perseverance and steadfastness in memory of hundreds of pro-Morsi demonstrators killed in the violent dispersal of their sit-in in Rabaa al-Adawiya Square in mid-August.

The young demonstrators vowed to stage a protest in Tahrir on October 6, the day on which Egypt celebrates the anniversary of its 1973 military victory against Israel.

October 6 is widely considered a day for expressing pride in the Egyptian military.

Several pro-Morsi groups have called for using the occasion to protest against the army's July 3 overthrow of Morsi, the country's first democratically elected president.

The rare protest, which drew dozens of sympathizers, came under attack by a group of unidentified individuals who started throwing stones at peaceful demonstrators, bringing traffic in the square to a halt.

"I'm not a Muslim Brotherhood member, but they, like everybody else, have the right to protest in the square," Amr Fares, an onlooker who identified himself as an Al-Azhar student, told the Anadolu Agency in the square.

"Why did the thugs attack them?" Fares asked.

The two sides exchanged stone-throwing for moments before security forces moved in to disperse the protest.

At least four protesters have been detained by security forces, according to the AA reporter on the scene.

"I have seen two of the detainees being brutally beaten inside one of the armored vehicles," one eyewitness told the AA.

Security forces chased other protesters in nearby streets.

After the troops dispersed the pro-democracy protesters, dozens of people gathered in the square and started chanted pro-army and anti-Muslim Brotherhood slogans.