Explosions and gunfire echoed over the hills surrounding the town, which has been under siege for two weeks, with hundreds of die-hard supporters of the country's fugitive former ruler concentrated around its centre. 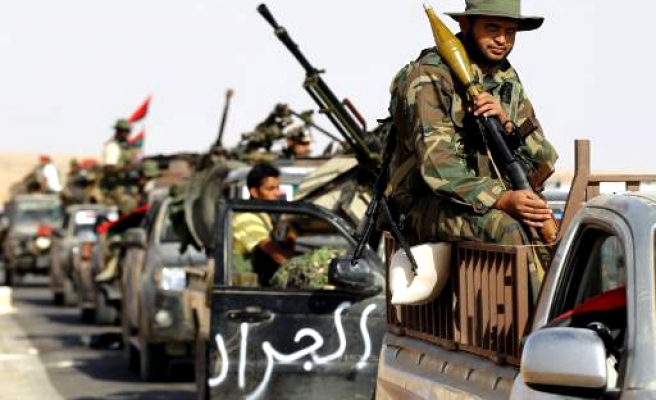 Forces loyal to Libya's new rulers surged into the desert town of Bani Walid on Friday in a fierce attack on one of the last strongholds still in the hands of Muammar Gaddafi loyalists that could prove a major turning point in the war.

Explosions and gunfire echoed over the hills surrounding the town, which has been under siege for two weeks, with hundreds of die-hard supporters of the country's fugitive former ruler concentrated around its centre.

There was also a report, on Al-Jazeera television, of fierce fighting at Gaddafi's home town of Sirte on the coast, a day after interim government forces announced a breakthrough.

After nearly seven months of fighting, anti-Gaddafi forces control most of Libya, including oil-producing centres and the capital, which they seized last month.

But they have met fierce resistance in a handful of pro-Gaddafi bastions such as the desert town of Bani Walid, the southern outpost of Sabha and Sirte, Gaddafi's birthplace 450 km (280 miles) east of Tripoli.

On Friday, truckloads of anti-Gaddafi troops shouting "Let's go! Bani Walid!" and columns of pickup trucks mounted with anti-aircraft guns hurtled towards the town, 180 km (110 miles) south of Tripoli, kicking up clouds of dust in the desert.

"We are going in. We finally have the orders. God is greatest. God willing, Bani Walid will be free today," fighter Mohammed Ahmed said, his rifle sticking out of his car window.

A short time later, the sound of heavy fighting could be heard from within the town.

Fighters loyal to the National Transitional Council (NTC) were also said to have moved into Sirte on Thursday.

"They have now entered the city. There was a coordinated push from the south, east and west and from along the coast. I'm not sure how far they have been able to enter," Abdulrahman Busin, a military spokesman for the NTC, said on Thursday.

"They are coming under heavy fire. There is a particular problem with snipers."

"We are telling you that as of tomorrow there will be atrocious attacks by NATO and their agents on the ground on the resisting towns of Sirte, Bani Walid and Sabha," Moussa Ibrahim told Syrian-based Arrai television late on Thursday.

The television said 16 people had been killed in Sirte, including women and children, as a result of NATO bombing, and that Gaddafi forces had destroyed a NATO warship and several vehicles. None of the reports could be independently verified.