The show of government largesse, the presenter added, came "upon the orders of Defense Minister Abdel-Fattah al-Sisi." 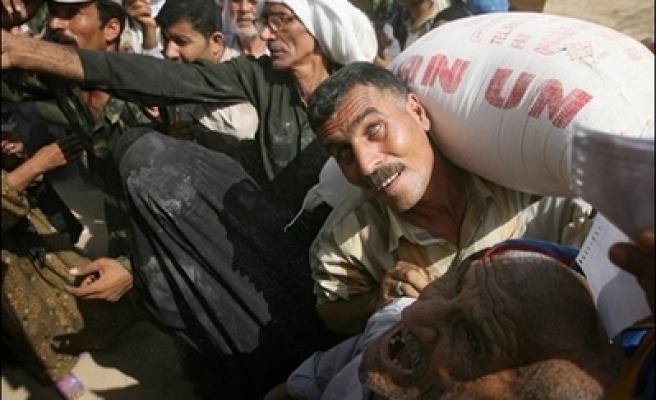 A move by Egypt's army to distribute 150,000 food packages to residents of an impoverished district that recently bore the brunt of a security crackdown made headlines Saturday in both the state-run and private press.

The gesture, the presenter added, came "upon the orders of Defense Minister Abdel-Fattah al-Sisi."

The town of Kerdasa was at the heart of a security operation last month, launched by the military with the stated aim of arresting those suspected of involvement in an August attack on a local police station that left at least 11 policemen dead.

The move to extend aid to Kerdasa's poor was the latest in an ongoing charity drive by the military, which, analysts believe, aims to win the hearts and minds of the Egyptian public – much of which already has great respect for Egypt's military establishment.

The overture also aims to fill the vacuum left by the sudden absence of the Muslim Brotherhood, which has borne the brunt of a nationwide arrest campaign against its leaders since the July 3 military ouster of elected president Mohamed Morsi – a Brotherhood leader himself – following mass protests against his administration.

Over the course of its eight-decade history, the Brotherhood has gained popularity among the Egyptian public by running social and medical services for the poor and distributing free or cheap foodstuffs. Such activities have drawn accusations from the Brotherhood's critics that the group was mixing charity with politics.

But after the group's popularity waned during Morsi's single year in office – not to mention the subsequent security crackdown on the group by the military-backed authorities – the army appears poised to take advantage of the charity vacuum left by the Brotherhood's sudden absence, observers say.

Local media also made much of a decision by Third Field Army Commander Osama Askar to provide medical treatment – at the army's expense – for a baby girl from Suez, along with 60 local fishermen from the same province.

Observers, however, believe the policy will only bring short-term results.

"Intensive charity work by the army will prove successful in the short term, but can't last for long since social and charity activities are not the army's responsibility," Mohamed Hussein, a Cairo University political science professor, told Anadolu Agency.

Charity work, he added, "needs massive effort that may prove beyond the abilities of the government."

"The Brotherhood's activities were like those of the Salvation Army in the United States, which has a database allowing it to reach out to the poor – something the US administration itself can't do," Hussein said.

"For example, the US administration distributes food stamps to the poor, but sometimes recipients aren't from this category and use them to buy non-essential items," he added.

"The Salvation Army, by contrast, can reach those most in need," Hussein explained. "And that's the difference between the army and the Brotherhood here in Egypt."

Nevertheless, the recent generosity shown by Egypt's military has come in for high praise by prominent media figures, who say the military hopes to prevent Islamist groups from accruing political advantage by helping the nation's poor.

"The armed forces seek to protect poor and low-income sectors against the temptations of the Muslim Brotherhood," well-known media figure Ibrahim Eissa said this week on his TV talk show.

The army, he added, "aims to preserve ideas and traditions and confront the use of religion in politics."