Ashton in Cairo for 3rd visit since Morsi ouster 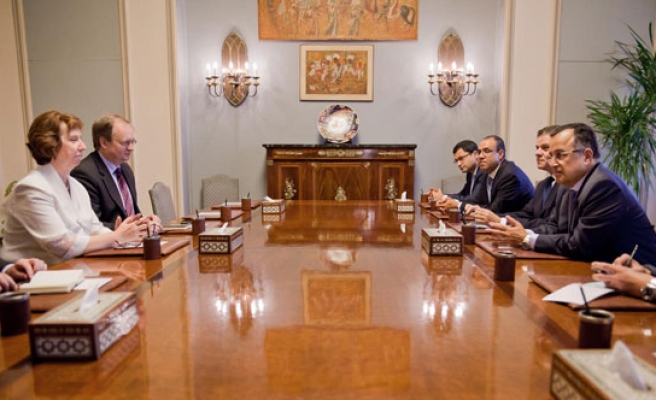 European Union's top foreign policy official is set to arrive in Egypt on Tuesday for her third visit to the country since the July 3 ouster of elected President Mohamed Morsi, a diplomatic source said.

During her two-day visit, she will also meet with Al-Azhar Grand Imam Ahmed al-Tayeb and Coptic Orthodox Pope Towadros II.

The top European diplomat will also meet with Mohamed Ali Beshr and Amr Darrag, representatives of the National Alliance for the Defense of Legitimacy, a coalition of largely Islamist groups that demand Morsi's reinstatement.

During her stay in Egypt, Ashton is also expected to meet with a delegation from the Salafist Nour Party.

The diplomatic source said that Ashton would try to persuade Muslim Brotherhood leaders to join "national dialogue" and contest upcoming parliamentary elections in return for a halt to an ongoing security crackdown on the group and suspension of a court ruling outlawing the Brotherhood.

The source added that Ashton's visit is aimed at promoting dialogue between the current Egyptian administration and the Brotherhood in hopes of reaching agreement on proposed national dialogue.

The biggest challenge facing Ashton will be persuading the Brotherhood to accept an army-imposed roadmap for Egypt's political future, the source said.

The source ruled out a possible meeting between Ashton and Morsi.

Egypt's first-ever democratically elected leader, Morsi was ousted by the powerful military on July 3 following mass protests against his presidency.

He has not been seen in public ever since and his whereabouts remain unknown.

Ashton had met Morsi during an earlier visit to Egypt in July, shortly after Morsi's ouster.

But the Egyptian Foreign Ministry said Ashton will not champion any mediation efforts.

"We can't accept mediation by any foreign party in terms of the internal situation," ministry spokesperson Badr Abdel-Ati said in a statement.

"Achieving reconciliation is the responsibility of the Egyptians alone," he said. "The Egyptian people have the right to monitor the internal situation and define their future".

The spokesperson denied reports about any initiative floated by Ashton to resolve the Egyptian crisis.

"She has not asked for a meeting with former President Mohamed Morsi and this would not be accepted," he said.

Asked about a planned meeting between Ashton and representatives of the Freedom and Justice Party (FJP), the Brotherhood's political arm, Abdel-Ati said the FJP is an existent party.

"There is neither a ban nor judicial verdicts against FJP leaders," he said.

The spokesperson said Ashton will meet senior Egyptian officials and hear the Egyptian views on issues as Palestinian-Israeli talks, the future of negotiations between Israel and the Palestinian Authority and the Syrian file".

Ashton seems extremely interested in Egyptian affairs. Is Ashton, like other leaders and countries, there for Egypt's sake? I wonder.See "A sudden surging interest in Egyptian affairs" http://azzasedky.typepad.com/egypt/2013/08/a-sudden-surge-in-egyptian-affairs.html