An eight-floor residential building collapsed overnight in Cairo, killing at least 18 people and injuring seven others 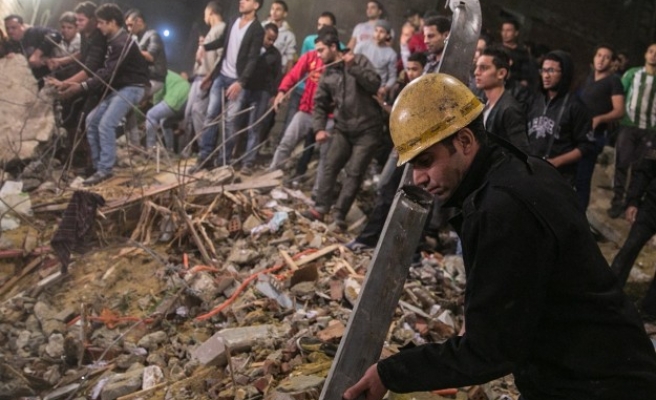 An eight-floor residential building collapsed overnight in Cairo, killing at least 18 people and injuring seven others, security sources said on Tuesday, adding that the casualty figure was expected to rise.

Emergency services, soldiers and neighbours spent the morning rifling through a 5-metre (15 foot) high pile of rubble in search of survivors in a densely populated northeast district of the capital. Bodies wrapped in black were removed on stretchers to waiting ambulances as bulldozers lifted debris.

Ahmed Fawzi, a local municipal official, told state television only four people had escaped from the collapse, which he said was likely caused by an illegal extension built on top of the building.

Such incidents are not uncommon in Egypt where old apartment buildings are routinely neglected and many new ones are put up without obtaining the required permits or adhering to safety standards that may raise the cost of construction.

A civil protection official told the state news agency four nearby buildings, at least one of which had been damaged during the collapse, had been evacuated as a precaution.

Rows of unfinished red brick and concrete buildings, already a problem under President Hosni Mubarak, have mushroomed in the turbulent three and a half years since the veteran autocrat was overthrown in a popular uprising.

Egypt's population of 86 million - the largest in the Arab world - is squeezed into the small percentage of land that isn't desert, mainly in narrow strips on the banks of the Nile and in its river delta.

Egypt has taken to destroying illegally erected buildings along the Nile and its tributaries to protect canals needed to help grow food.