Attack on U.N. peacekeepers in Mali

Mauritanian news website Alakhbar posted an audio statement on Friday claiming the attack on peacekeepers was done on behalf of the armed group al-Mourabitoun. 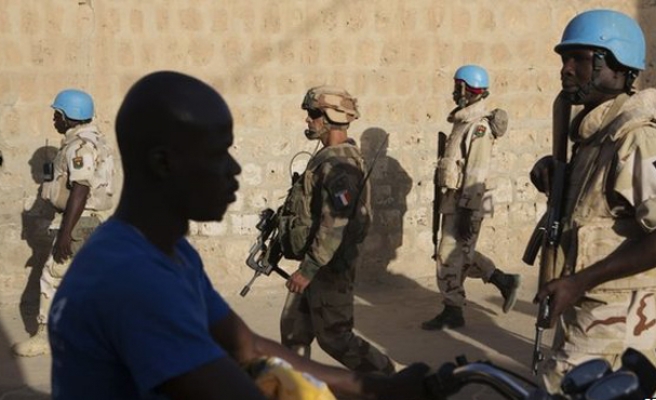 A group headed by former al Qaeda fighter Mokhtar Belmokhtar has claimed responsibility for a suicide raid on U.N. peacekeepers in northern Mali earlier this week as two people were killed in an attack targeting truck convoy.

At least three civilians were killed and nine peacekeepers from Niger were seriously injured in Wednesday's attack on a U.N. base in the town of Ansongo, around 80 km (50 miles) south of the city of Gao.

An audio recording by Mourabitoun group claimed the attack saying, "We, the Mourabitoun group, announce the martyrdom operation that one of our knights, Ibrahim al-Ansari, undertook at the headquarters of the Nigerien forces," stated the low-quality recording.

The authenticity of the recording could not be verified, but Alakhbar is often sent statements by fighters  in Mali.

Al-Mourabitoun was formed by the veteran Algerian Belmokhtar, who is a target of French forces hunting down al-Qaeda-linked fighters in West Africa.

The group has also said it was behind an attack on a restaurant in Mali's capital Bamako last month that killed five people including a French citizen and a Belgian security officer.

The recording said the Ansongo bombing was carried out in reprisal for Niger President Mahamadou Issoufou's participation in a march in Paris following the attack on the French satirical weekly Charlie Hebdo in January.

It also condemned Issoufou for allowing the militaries of France and the United States to base forces in Niger.

"After stopping the convoy, the attackers shot the drivers in cold blood before setting the trucks on fire," read a statement released on Saturday.

The United Nations has deployed some 10,000 personnel in Mali, which saw its desert north overrun by al Qaeda-linked fighters in 2012.

A French-led intervention succeeded in pushing them out of major cities and towns a year later, but there remain pockets of insurgents who launch attacks on U.N., French and Malian forces as well as civilians.