In Sanaa, soldiers used live rounds against protesters as they marched out of their protest camp into the streets of the capital. 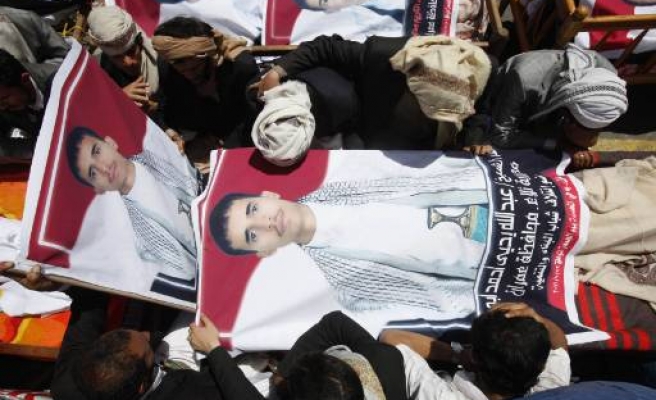 Yemeni soldiers killed two tribal fighters and wounded 18 anti-government protesters in the latest clashes in a week of unrest that has raised fears of a descent into all-out civil war.

In an escalation of the violence to outside the capital, two pro-opposition tribesmen were killed in the mountainous region of Naham, a clan sheikh said, after the army shelled the area where the armed tribesmen were centered and clashing with loyalist troops.

In Sanaa, soldiers used live rounds against protesters as they marched out of their protest camp into the streets of the capital.

"I saw soldiers from above, in buildings and on the bridge," said Mohammed al-Mas, 21, a protester whose back was drenched in blood from a gunshot wound. He said an electricity pole had crashed down and divided the march into two.

"Then the gunfire started and I ran back, but I suddenly felt the shot in the back and I don't know what happened next."

Eighteen people were wounded and medics said two were in critical condition. Doctors denied a television report that one protester had been killed.

Some 17 people were killed on Saturday when government forces attacked the main opposition protest camp in Sanaa, said witnesses and medics, bringing the death toll in five days of fighting to around 100.

Yemen's President Ali Abdullah Saleh unexpectedly returned to the country on Friday after a three-month stay in neighbouring Saudi Arabia recuperating from an assassination attempt in June.

His arrival in Sanaa came despite the entreaties of Western and Gulf states for the veteran leader to end his 33 years in power following an eight-month revolt.

Saleh, 69, has not yet announced his intentions since coming back to Yemen, but said on Saturday he was "carrying the dove of peace and the olive branch".

He is expected to give a speech on state television later on Sunday.

"It's funny he says he came with the olive branch. He's the enemy of the people," said Abdulqawy Noaman, a professor at Sanaa University who was shot in the leg.

Popular protests in January inspired by the Arab Spring sparked a revolt against Saleh's rule that was joined by some of the country's tribal leaders and a dissident general.

Protesters accuse Saleh, his family and government of widespread corruption and failing to address crippling poverty and lawlessness in a land where one in two owns a gun.

The demonstrators are backed by powerful forces including the elite leaders of the al-Ahmar clan, which heads Yemen's largest tribal confederation the Hashed. They also are backed by the military force of dissident General Ali Mohsen, who defected in March to set up a military confrontation.

The streets of Yemen's capital where protests happened daily have been divided between rival forces loyal to the president, the general and the tribes for months. Efforts by the demonstrators to march into government areas has sparked bloody battles between state troops and Mohsen's forces in which protesters have been the biggest victims.

On Sunday, hundreds laid out prayer mats in the plaza the protesters have dubbed Change Square to pray for those who died on Friday. Nine were Ahmar's tribal fighters in the heavy clashes between pro- and anti-government tribes. One was a television journalist who succumbed to heavy injuries while covering a protest days earlier.

The bodies were wrapped in Yemeni flags, and laid out in the square as protesters surrounding them chanted to their recently returned president: "Oh you tyrant wait, justice is coming to you!"