Sustained blasts from rocket-propelled grenades, mortars and anti-aircraft guns rang out on Friday in the centre of Zawiyah. 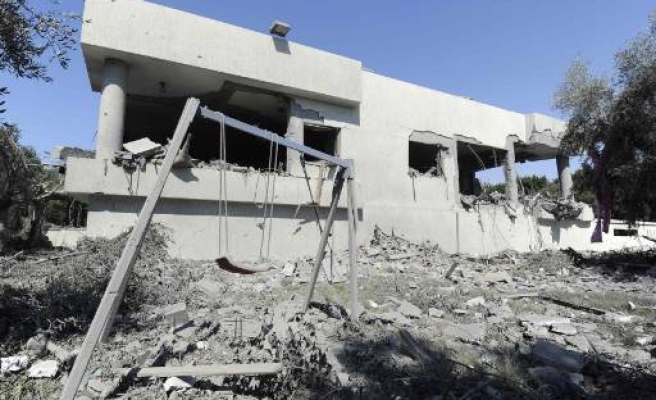 Rebels are fighting battles in coastal cities on either side of the besieged Libyan capital Tripoli in a drive to finally topple Muammar Gaddafi after six months of war.

Sustained blasts from rocket-propelled grenades, mortars and anti-aircraft guns rang out on Friday in the centre of Zawiyah, a city on the coastal highway 50 km (30 miles) west of Tripoli that the rebels entered this week.

The rebels' capture of Zawiyah has transformed the six-month conflict by cutting off Tripoli from its main road link to the outside world, putting unprecedented pressure on the 41-year rule of Gaddafi.

As they pushed to consolidate control of the city and its strategic oil refinery, rebels in Zawiyah's central square exchanged heavy fire with Gaddafi forces holed up inside a nearby hospital before driving them out, Reuters witnesses said.

East of the capital, where fighting has been bloodier and rebel advances far slower, opposition forces fought street battles in the city of Zlitan but suffered heavy casualties, a Reuters reporter there said. A rebel spokesman said 32 rebel fighters were killed and 150 wounded.

Gaddafi's spokesman Moussa Ibrahim said late on Friday the government's military retained the upper hand in both Zawiyah and Zlitan.

The sudden imposition of a siege around Tripoli has trapped its residents behind the front line and cut it off from fuel and food. The International Organization for Migration said on Friday it would organise a massive rescue operation to evacuate thousands of foreign workers, probably by sea.

Some 600,000 of the 1.5 million to 2.5 million foreign workers in Libya fled the country early in the conflict, but many thousands stayed in Tripoli, which until this week was far from fighting and a two-hour drive from the Tunisian border.

In a possible psychological blow to Gaddafi's government, rebels said his former deputy Abdel Salam Jalloud had defected to rebel-held territory in the Western Mountains.

Jalloud was a member of the junta that staged a 1969 coup bringing Gaddafi to power and was once seen as Gaddafi's second in command, but fell out of favour in the 1990s. It was not immediately clear what impact his defection would have.

"He is definitely here in Zintan. He is under the control of the military council here," Massoud Ali, a local rebel spokesman, told Reuters. Rebels showed Reuters a video of a person they identified as Jalloud standing among them.

Libyan Deputy Foreign Minister Khaled Kaim would not comment on Jalloud's whereabouts but said if Jalloud had left Libya he hoped he would help bring a negotiated end to the conflict.

With rebels pushing on the ground, NATO has pressed on with its campaign from the air and its warplanes pounded targets in the capital overnight.

Gaddafi's government has blamed NATO bombings for scores of civilian deaths and said 27 people were killed in the most recent raids on Tripoli. NATO accuses Gaddafi forces of housing military assets near civilians.

Libyan officials brought journalists on Friday to a residential district where a compound of several large buildings was blasted to pieces. Neighbours said it belonged to Abdullah al-Senussi, Gaddafi's brother-in-law and head of intelligence. A government official said Senussi was not there at the time.

The siege of Tripoli and the looming prospect of a battle for the capital itself have give new urgency to the question of Gaddafi's fate. The leader and his officials have repeatedly vowed that he will never leave the country, but rebels say they will not stop fighting until he departs.

The two sides held talks early this week in neighbouring Tunisia, attended by a former French prime minister, but announced no breakthroughs. The severing of the road link between Tripoli and Tunisia makes further talks difficult.

NBC News reported Gaddafi was making preparations to leave Libya with his family for possible exile in Tunisia, but that it was unclear if he would follow through. NBC said the information came from U.S. officials who cited intelligence reports.

Deputy Foreign Minister Kaim reiterated the government stance that Gaddafi would not depart Libya but said Libya was in favour of any negotiations to end the fighting.

"But the United States and other key players have to give their blessing to these negotiations," he said.