Almost 30 Libyan soldiers were killed and 70 wounded in a double bombing and clashes in the port city of Benghazi, medics said 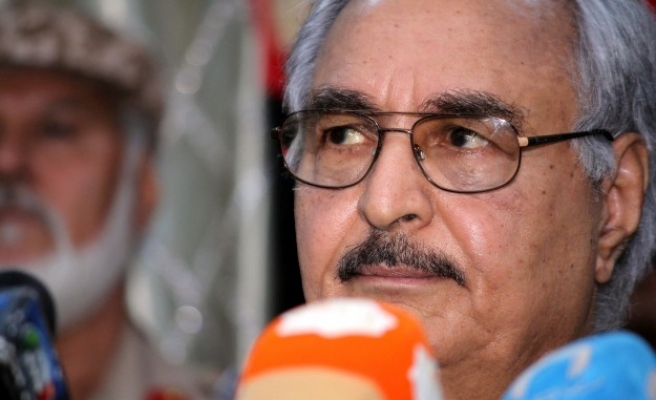 At least 30 people were killed and 70 others injured on Thursday in a twin bombing and subsequent clashes near an airbase associated with renegade general Khalifa Haftar in Libya's eastern city of Benghazi.

A source at the government-run Marg hospital in Benghazi told Anadolu Agency that the facility had received 13 bodies, mostly army troops and civilians, and 70 injured people from the site of the clashes near Benina airbase, which is run by pro-Haftar forces.

A hospital medic put the death toll at 29 and the number of wounded at 70.

Twin bombings rocked the vicinity of Benina airbase in eastern Benghazi on Thursday, followed by fierce clashes between militiamen and pro-Haftar troops.

Libya has been dogged by political instability since Muammar Gaddafi's ouster and death in 2011, with several militias who helped overthrow the strongman holding onto their weapons.

Benghazi, Libya's second city, has recently turned into a battlefield between troops loyal to Haftar and the Benghazi Revolutionaries Shura Council and Ansar al-Sharia militias.

The Libyan government, meanwhile, has remained largely absent from the scene.

Earlier this year, Haftar declared war on armed militias based in eastern Libya, dubbing his campaign "Operation Dignity" – the stated aim of which was to "purge" Libya of "extremists."

After serving as army chief-of-staff under Gaddafi, Haftar spent nearly two decades in the United States in exile before returning to Libya in 2011 to join the uprising against the autocratic ruler.

Since Gaddafi's ouster and death some three years ago, Libyan authorities have struggled to restore law and order, with many militias that had helped overthrow Gaddafi refusing to surrender their weapons.