Some brief pushing and shoving earlier in the square had been quickly stopped by other demonstrators in each group. 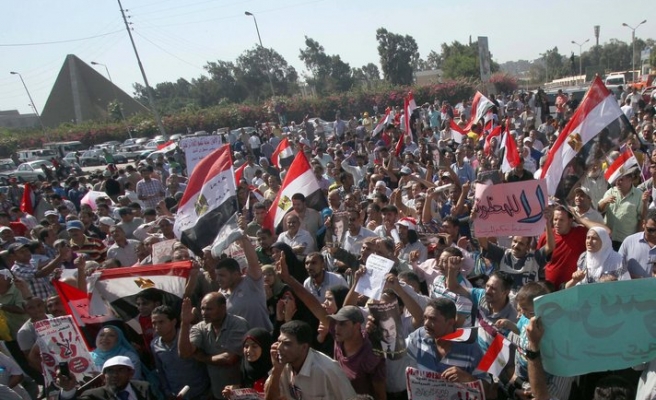 Opponents of Egyptian President Mohamed Mursi scuffled with his supporters on Friday during a demonstration.

Egyptians had been nervous that Friday's anti-Mursi protest, flagged for several weeks, could turn violent and security was tight around the presidential palace and some other sites.

In Cairo's Tahrir Square, rival groups of youths hurled stones and bottles at each other, staging running battles in side streets. Some wielded sticks and charged opponents. Dozens also scuffled in Ismailiya, east of Cairo, a witness said.

But scenes were calmer in other areas of Cairo where Mursi's opponents gathered, and total numbers across the city and elsewhere were still small by early afternoon, numbering in the hundreds.

"Wake up Egyptian people. Don't fall for the Brotherhood," said Mahmoud, in his 50s, addressing about 200 people in Tahrir Square. "Egypt is for all Egyptians, not only one group."

But some said Mursi should be judged at the ballot box, not on the street.

"Respectable democratic countries elect a leader and then give him time to prove himself," said Sabr Salah, 47, despite not being a Mursi backer. "We must give Mursi a chance because he won the election. We can vote him out again next time."

Violence in Tahrir flared when bangs went off nearby, but it was not clear if they was caused by a weapon or something else.

Elsewhere, police had cordoned off the presidential palace and the army blocked a road to the Defence Ministry, where there had been clashes between protesters and troops this year.

April 6 said in a statement before the protest that it disagreed with the Brotherhood on many issues but added: "Does all that and more push us to issue a judgement now to burn the group's members or premises and exile them from the country?"

Ahmed Said, head of the Free Egyptians, another liberal group staying away, wrote on Facebook: "Those who want to bring down the Brotherhood should bring them down via elections."

Though some say he deserves more time, he has still drawn criticism, including accusations that he has sought to muzzle the media. Two journalists face charges of insulting Mursi.

However, some liberals back Mursi's early moves, such as his Aug. 12 decision to dismiss top generals, who were seen as obstructing civilian rule, and to cancel a decree that had given the army legislative power in the absence of the parliament, that the generals had dissolved based on a court order.

Yet, one of the biggest tests Mursi faces is whether he can turn around the stricken economy. Anger at the gaping rich-poor divide was a major spark for the anti-Mubarak revolt.

This week, Egypt started talks for a $4.8 billion loan from the International Monetary Fund which could help rebuild confidence in a nation that was once a darling of frontier market investors.