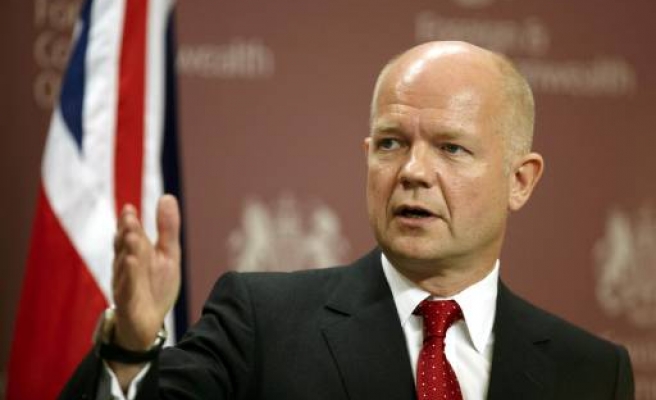 Britain will expel all remaining Libyan diplomats, treat the rebel opposition as the legitimate government and unfreeze some Libyan assets, Foreign Secretary William Hague said on Wednesday, in the latest diplomatic push to break Muammar Gaddafi's grip on power.

Hague dismissed suggestions he had softened his stance on the fate of the Libyan leader, saying Britain still wanted him to leave power and face charges of crimes against humanity at the International Criminal Court, although he repeated that it was not for external powers to dictate Libya's future.

Britain, which expelled Libya's ambassador to London in May, has told the remaining nine diplomats to pack their bags.

"We are inviting the National Transitional Council to appoint a new Libyan diplomatic envoy to take over the Libyan embassy in London," Hague said.

The move to recognise the rebel opposition as Libya's only legitimate governing body follows a similar decision by the United States and a group of world powers earlier this month in Istanbul.

"The prime minister and I have decided that the United Kingdom recognises and will deal with the National Transitional Council as the sole governmental authority in Libya," Hague told reporters.

"This decision reflects the NTC's increasing legitimacy, competence and success in reaching out to Libyans across the country."

Analysts said the measures were unlikely to have much of an immediate impact on the ground in Libya, where rebel forces have failed to oust Gaddafi from Tripoli despite having the backing of Western military might.

"It's difficult to see, unless there's some acceptance on the side of Gaddafi and his immediate entourage, I'm not sure this is really a way out of the stalemate," said Claire Spencer, head of the Middle East Programme at London's Chatham House think tank.

"It remains a politically blocked situation and I'm not sure this will unblock it."

Hague said Britain is continuing to explore how to unfreeze assets to support the rebels in line with a U.N. Security Council resolution.

As part of measures to support the opposition, Hague said Britain would unfreeze 91 million pounds ($148 million) of assets held in Britain for the rebel-held oil company AGOCO and seek to release more funds for civilian purposes.

Britain will also work to free up more assets, including Libyan currency stocks and assets of the Libyan central bank. An aide to Hague said discussions were ongoing to ensure that any released money would used for civilian purposes.

"This company is operating under the control of the National Transitional Council and we are assured its activities will not benefit any listed entity under (U.N.) sanctions.

"We will issue licences for the use of its frozen funds to meet basic needs within Libya," Hague said, adding the measure was designed to allow Britain to give greater practical assistance to the rebels.