Both leaders are hugely popular on the streets of Libya, where "Merci Sarkozy" and "Thank you Britain" are common graffiti slogans. 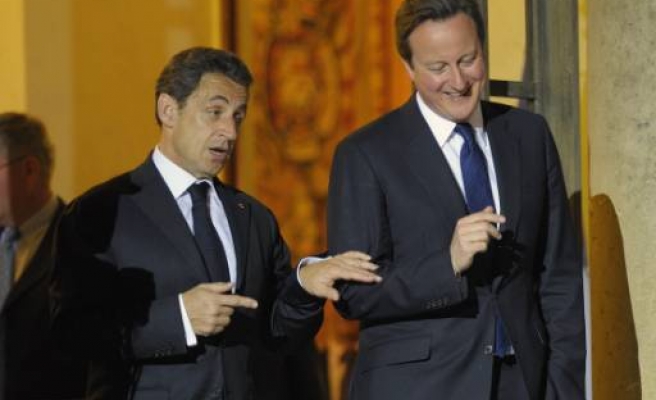 The French and British leaders will visit Libya on Thursday to congratulate the new rulers they helped install, but families fleeing besieged bastions of ousted strongman Muammar Gaddafi are a reminder that peace is still far off.

The visit will be a victory lap for Nicolas Sarkozy and David Cameron, who defied doubters at home to lead a NATO bombing campaign that succeeded in ushering in a victory by forces who swept away Gaddafi's 42-year rule last month.

Both leaders are hugely popular on the streets of Libya, where "Merci Sarkozy" and "Thank you Britain" are common graffiti slogans. Both may hope to earn political dividends back home from what now appears to have been a successful bet.

But on the eve of their visit, the leader of Libya's National Transitional Council said heavy battles lie ahead against Gaddafi loyalists who have refused to surrender.

NTC Vice Chairman Abdel Hafiz Ghogo told Reuters the two leaders would visit both Tripoli and Benghazi, where the NTC rulers are still based even though Gaddafi opponents seized the capital more than three weeks ago.

Western countries and neighbors are anxious to welcome Libya into the international community, not least so it can restart lucrative oil production frozen by six months of war.

Libya's new leaders say the international community has been slow to release frozen assets; diplomats said on Wednesday Britain had circulated a draft resolution to the United Nations Security Council to ease sanctions against Libya's National Oil Corp (NOC) and central bank and hoped for a vote this week.

But the failure to capture Gaddafi, and ongoing fighting in and around besieged towns still firmly held by the ousted leader's supporters, are proof that a peaceful and prosperous future for Libya is far from assured.

The European Union on Wednesday demanded an end to arbitrary killings and detentions by both sides, and especially to vigilante attacks on sub-Saharan Africans and black Libyans, who are widely accused of having fought for Gaddafi.

Fight "far from the end"

Gaddafi has not been seen in public since June. In a letter read out on Syria-based Arrai TV he called on the U.N. Security Council to protect his hometown of Sirte -- still held by forces loyal to him -- from what he called NATO "atrocities."

"If Sirte is isolated from the rest of the world in order for atrocities to be committed against it, then the world has a duty not to be absent," Gaddafi was quoted as saying.

His spokesman, Moussa Ibrahim, speaking on a satellite phone from an undisclosed location, told Reuters the 69-year-old leader was still in Libya, in good spirits and ready to fight.

"The leader is in good health, in high morale ... of course he is in Libya," said Ibrahim, who declined to give his own location. "The fight is as far away from the end as the world can imagine. We are still very powerful, our army is still powerful, we have thousands upon thousands of volunteers."

The need for Sarkozy and Cameron to visit Benghazi as well as Tripoli is a sign of the obstacles Libya still faces in transforming itself into a peaceful, unified democracy. The NTC has not yet been able to safely establish a government in a capital still bristling with militiamen from disparate groups.

The country is deeply divided. Many of its new rulers hail from Benghazi in the east, while the fighters who won the battle for Tripoli mostly come from towns in the west. The NTC has promised to name a more inclusive government lineup within days.

Ghoga, the NTC deputy chairman, told Reuters in Benghazi that Abdel Jalil and the NTC would remain based there at least until the "liberation" of cities in Gaddafi's supporters' hands.

NTC Chairman Mustafa Abdel Jalil called for equipment to fight what he predicted would be hard battles against Gaddafi loyalists near the city of Sabha deep in the Sahara desert.

"There will be a lot of fierce fighting in this area," he told BBC TV. "We ask for support to get the right equipment in order to conquer these troops and to proceed further south to try and capture colonel Gaddafi and his family."

He said Gaddafi would be planning attacks on oil fields, cities or power plants.

Towns held by Gaddafi loyalists have proven tenacious despite weeks of siege. After a week of fighting, NTC forces at Bani Walid 150 km (95 miles) southeast of Tripoli have been urging people to leave before they try to storm the town.

Scores of cars packed with families left Bani Walid on Wednesday as NTC forces broadcast messages telling them to go and handed out free petrol to help them escape.

"There is a lot of random shooting. It is much safer for my children to leave. Gaddafi militia men do not want to negotiate," Fathalla al-Hammali, 42, said, driving away from the town with his three young children.

Daw Saleheen, who is heading regional forces battling for control of Bani Walid, said he was ready to use heavy weapons against an estimated 1,200 loyalists, who had placed rockets and mortars on civilian homes as well as dozens of snipers.

"We know all their positions," Saleheen told reporters on the northern outskirts of his home town. "We have sent a message to all civilians that if they can they must leave now."