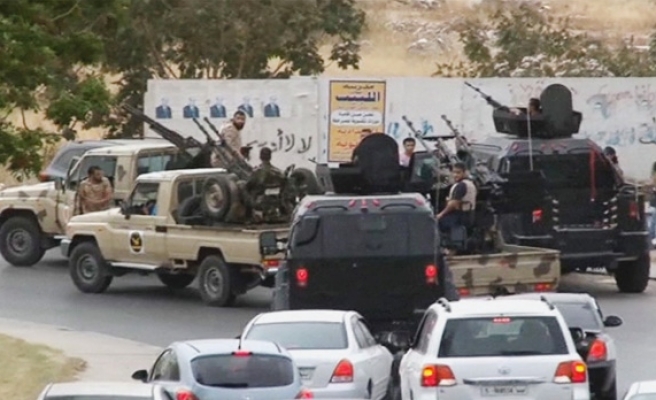 A British envoy visited Libya's parliament at its new seat in the eastern town of Tobruk on Tuesday in a show of support against a rival assembly set up by armed groups who seized the capital Tripoli last month.

Senior officials and the elected House of Representatives moved to the east of Libya when Tripoli fell to an alliance of armed factions from the western city of Misrata in August after a long battle with rival groups.

The fighting and lawlessness also prompted most countries, including Britain, to close their diplomatic missions in Libya.

The conflict is part of a wider struggle among former rebels who helped topple Muammar Gaddafi in 2011 but have now turned their weapons on each other in their fight to take power and control the country's vast oil reserves.

"We recognise the legitimacy of the Libyan parliament," Britain's Libya Special Envoy Jonathan Powell said in a televised news conference from Tobruk.

Western powers like Britain worry Libya will turn into a failed state that could flood Europe with migrants and becomes a safe haven for militants.

After the meeting, a war plane crashed just a kilometer from the seat of the parliament, killing the pilot and two residents, medics said. Nine people were wounded when the plane went down into a residential building.

The plane, from Libya's outdated airforce, had flown over the city to honour a pilot that had crashed in the eastern city of Bayda last week. Some Libyan channels had said the plane had been shot down in Bayda but forces of a renegade general claiming the plane had blamed a technical fault.

The House of Representatives was elected in June in a vote marked by a very low turnout. The assembly's previous name, the General National Congress, was scrapped as many Libyans associated it with political infighting and chaos.

Now the alliance controlling Tripoli says that, together with a group of former lawmakers, it has reinstated the GNC.

Powell said there would be no military intervention as demanded by some Libyans tired of fighting between armed groups. Libya's conflicts could be solved diplomatically, he said, without elaborating.

This has so far failed as former rebels have refused to disarm.

On Sunday, the central government released a statement admitting it had lost its grip on many levers of power. The victory of Misrata forces in Tripoli has not yet affected oil production, but traders say ownership of the oil might be subject to legal challenges if those forces take control of the central bank, where crude revenues are booked.

The volatile situation in Tripoli has been exacerbated by separate clashes in the eastern port city of Benghazi where Khalifa Haftar, a renegade general from the Libyan army, has launched war on militants.

Haftar's units, allied to regular special forces, have lost several army camps to the rivals who have been trying for days to seize Benghazi's airport and air base.