Campbell said she had been given a pouch containing small, rough diamonds while in South Africa. 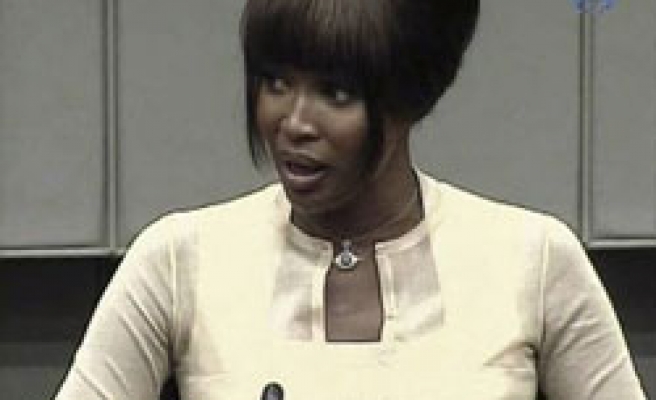 British supermodel Naomi Campbell, testifying at the war crimes trial of former Liberian President Charles Taylor, said on Thursday she had been given a pouch containing small, rough diamonds while in South Africa but did not know who they were from.

Campbell said two unidentified men came to her bedroom after she attended a charity dinner with Taylor and then South African President Nelson Mandela in 1997.

"I was sleeping and had a knock at the door that woke me up. Two men were there and they gave me a pouch and said: 'A gift for you'," she told the U.N. Special Court for Sierra Leone in The Hague.

"I went back to bed. I looked into the pouch the next morning," the model said. "I saw a few stones, they were very small, dirty looking stones."

Prosecutors summoned Campbell to support their allegations that Taylor received so-called "blood diamonds" from rebels in Sierra Leone and used them to buy weapons during his 1997 trip to South Africa.

Taylor has denied the allegations as "nonsense".

He is charged with 11 counts of instigating murder, rape, mutilation, sexual slavery and conscription of child soldiers during wars in Liberia and Sierra Leone in which more than 250,000 people were killed. He denies all the charges.

Under defence questioning, Campbell stressed she did not know personally whether the stones came from Taylor. She said she had handed them to the manager of the Nelson Mandela Children's Fund on boarding a luxury train the following day and asked him "to do something good with them".

The supermodel said she recounted the incident at breakfast to actress Mia Farrow and modelling agent Carole White.

"One of the two said 'That's obviously Charles Taylor', and I said 'I guess it was'," the model told the court.

Asked whether she thought it was strange to be given such a gift, Campbell replied: "It's not abnormal for me to get gifts, I get gifts all the time."

Speaking calmly, the supermodel said either Farrow or White had said the stones were probably diamonds, but she did not recall showing the stones to the women, despite taking the pouch with her to breakfast.

Defence lawyers tried to delay her testimony, arguing the former Liberian president was being denied the right to a fair trial because they had not seen her full intended statement. The court dismissed their motion on Wednesday.

But her evidence did not appear to incriminate him.

Citing concerns for her security, the 40-year-old supermodel won a court order barring journalists from photographing or filming her arrival and departure from the courthouse.

She was driven to the tribunal in one of two black vans, police said, out of sight of a throng of photographers and camera crews lining the street outside.

She was, however, filmed while giving testimony wearing a cream-coloured outfit with matching high-heeled sandals and a choker necklace, her hair tied in a bun with two loose strands and a heavy fringe framing her face.

"I don't want to be here. I was made to be here ... This is a terrible inconvenience to me," Campbell told the court. "Obviously I just want to get this over with and get on with my life."

Prosecutors had alleged that Taylor -- accused of receiving the diamonds from rebels a month before his trip to South Africa -- gave Campbell a large rough cut diamond after the dinner.

"The timing of this dinner is important because if this story ... is true, it places Taylor in possession of at least one rough-cut diamond the month after the rebels came to see him, and the month before the junta received a large shipment of weapons in October," said Open Society Justice Initiative, a human rights organisation monitoring the Taylor trial.

Prosecutors plan to call White and Farrow next Monday.

The prosecution says White had heard Taylor say he was going to give Campbell a diamond and was there when she received it, while Farrow attended the reception where Campbell met Taylor and was told later by Campbell about the gift.

Defence lawyer Griffiths has argued that Campbell's evidence is "entirely based on conjecture", stressing in court filings that Campbell has previously denied publicly ever receiving a diamond or diamonds from Taylor.

Campbell initially refused to testify, prompting the court to subpoena her. A subpoena is a legal measure used to gain testimony from an unwilling witness on the threat of a fine or imprisonment.