"What they're doing is against the Christian faith," Archbishop Dieudonne Nzapalainga said in an exclusive interview. 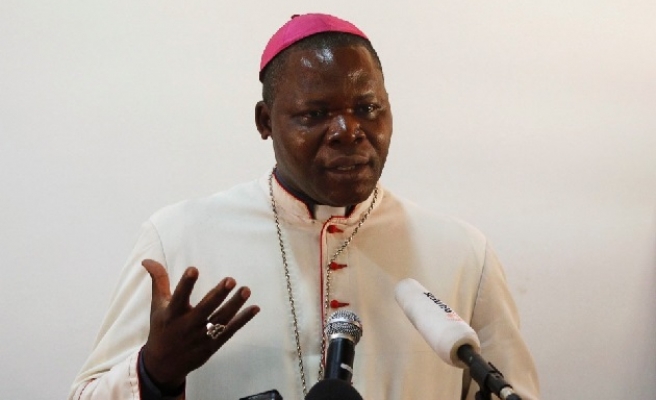 Bangui Archbishop Dieudonne Nzapalainga has condemned the killing of Muslims in the Central African Republic (CAR), describing those perpetrating such attacks as "barbaric and inhuman criminals."

"What they're doing is against the Christian faith," Nzapalainga told Anadolu Agency in an exclusive interview at St. Paul's Catholic Church in the Ouango area, some 6km southeast of capital Bangui.

"The Bible clearly states: 'Love your neighbor as you love yourself'," he asserted.

Nzapalainga went on to note that every religion had its extremists.

Muslims have been targeted with increasing frequency since January, when Catherine Samba-Panza, a Christian who had been serving as mayor of Bangui, was elected president.

A number of Muslims have recently been lynched in broad daylight and their bodies set on fire.

Last week, no sooner had Samba-Panza left an official ceremony than hundreds of army personnel dragged a civilian from the crowd and lynched him on suspicion of being a former Muslim seleka fighter.

Several mosques have recently been destroyed in Bangui and scores of Muslim homes looted.

Seleka rebels then reportedly attacked Christian homes, looted property and carried out summary executions, leading to the emergence of the Christian militia group known as the anti-balaka.

Djotodia stepped down in January under international pressure.

Archbishop Nzapalainga said that he and Imam Oumar Kobine Layama, a leader of CAR's Muslim community, had continued to warn their respective religious communities against sectarian violence.

"We're telling people to stop killing each other," he said.

"But it will take time for them to completely change their attitude of hatred."

Nzapalainga pointed out that Muslims and Christians had coexisted in CAR for years.

He voiced optimism that the current crisis would soon come to an end and the two communities would reconcile and live together again in peace.

"An example of coexistence and brotherhood is me and the imam who have been working together to diffuse these religious tensions," the archbishop said.

"I hope the violence will end," he added.

Imam Layama, for his part, condemned the summary execution of Muslims and likewise expressed hope that the violence would end soon.

"It's our prayer that this sectarian violence ends and the people reconcile and live like they did before," he told AA.

Imam Layama played down mounting Muslim criticisms that he was spending too much time with Christian leaders while ignoring Muslims' everyday grievances.

Last month, a group of Muslims organized a press conference in Bangui at which they called for the imam's dismissal.

"It was just a few people who organized the conference," Imam Layama said in his defense.

"I was elected by all Central Africans and I will continue to work with other leaders from different faith groups in championing for peace," he added.