At least 36 people had died in the last three days and 27,400 fled their homes, the UN says 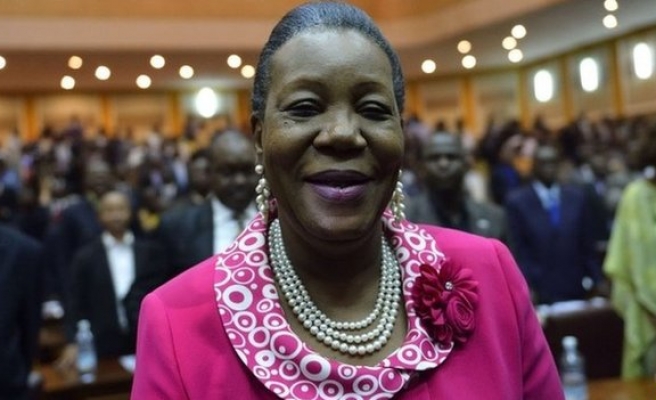 "We fear that the violence that we're seeing in Bangui is a return to the dark days of late 2013 and 2014, when thousands were killed and tens of thousands had to flee their homes," UN refugee agency spokesman Leo Dobbs told reporters.

Announcing she was cutting short a visit to the United Nations to return home, interim President Catherine Samba Panza said in a message broadcast on national radio: "I appeal to you my compatriots for calm. I ask you to return to your homes."

"I know that when I speak to you, you listen," she added.

Sources told AFP she was expected to be back in the city late Tuesday.

In Bangui, shots continued to ring out even after the 0500 GMT lifting of a dusk-to-dawn curfew, following a night of sporadic shooting as security forces sought to repel looters, an AFP correspondent said.

With barricades blocking traffic, the heart of Bangui stood largely empty as French and UN peacekeepers from the MINUSCA force patrolled key areas.

MINUSCA has denied reports that its troops killed three people and injured others after opening fire on a crowd of several hundred demonstrators heading towards the presidency to demand Samba Panza's resignation.

But it pledged to look into the allegations. The 10,000-strong peacekeeping force is already facing 17 damaging accusations of sex abuse. French troops, who number around 1,000, face separate sex abuse allegations.

Across the city, streets were deserted as people stayed at home for fear of fresh fighting and to avoid attacks by looters, with only an occasional taxi visible, an AFP correspondent said.

Overnight, shooting erupted as security forces tried to stop looters from attacking the premises of several humanitarian organisations which had been evacuated for security reasons, a military source told AFP.

Looters targeted the offices of the UN's World Food Programme, French medical NGO Première Urgence and the Dutch NGO Cordaid, police said, indicating they had repelled them in several places.

"Attacks on the civilian populations and the targeting of humanitarian workers whose aim is to deliver lifesaving aid must stop immediately," the EU said in a statement.

The latest round of violence in two years of trouble broke out Saturday after a motorcycle-taxi driver was murdered in the Muslim-majority PK-5 neighbourhood of Bangui, the unrest quickly spreading to other districts, medical and humanitarian sources said.

Around 100 people have also been wounded in the bloodshed, prompting the government to impose a curfew on the capital.

PK-5 was the epicentre of an unprecedented wave of violence between Christians and Muslims in late 2013 and early last year. It remains the last bastion for Muslims hounded out of other districts by Christian militias.

Central African Republic descended into bloodshed more than two years ago after longtime leader Francois Bozize was ousted by fighters in the mainly Muslim Seleka force, triggering the worst crisis since independence in 1960.

Since then, the country has been gripped by violence between the Seleka fighters and Christian militias known as "anti-balaka" or anti-machete.

Though the violence has subsided significantly since last year, there is still a high crime rate fuelled in part by easy access to weapons left over from the sectarian conflict.

Presidential and legislative elections are due to be held by the end of the year, but they have already been pushed back several times as the country continues to grapple with the crisis.