Muslims were our neighbors and friends, but for them to support the seleka rebels meant they were against us, a top leader of the Christian anti-balaka militia said. 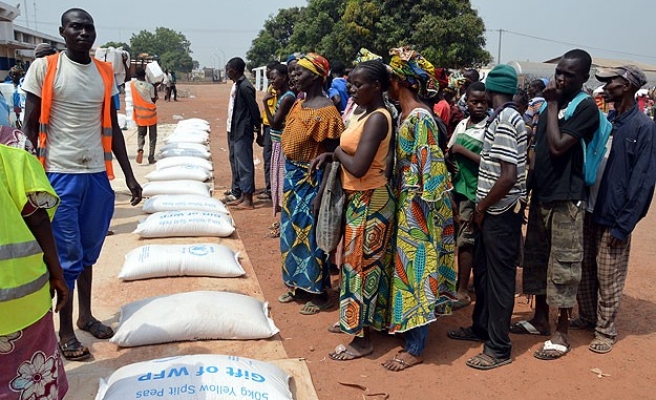 "We had no intention of killing Muslims, but we later noticed that so many Muslims in the country were supporting the seleka rebels," Alfred Legrald Ngaya told Anadolu Agency in an exclusive interview conducted in the Boyirab Township on the outskirts of capital Bangui.

He said his fighters had seen seleka members entering Muslim homes to eat and converse with the owners.

"Muslims were our neighbors and friends, but for them to support the seleka rebels meant they were against us," he asserted.

"This angered the anti-balaka, as well as the majority-Christian population in the country, hence, the attacks you're seeing on Muslims," Ngaya said as he stood, flanked by militiamen, in the home of top anti-balaka leader Edouard Patrick Ngaissona.

Ngaissona, a former youth minister, had declined to be interviewed as earlier agreed, deputizing Ngaya to speak on his behalf.

Muslims have been targeted with increasing frequency since January, when Catherine Samba-Panza, a Christian who had been serving as mayor of capital Bangui, was elected president.

Christians, who account for the majority of CAR's population, accuse their Muslim compatriots of supporting the former seleka rebels who ousted Francois Bozize, a Christian, last year and installed Michel Djotodia, a Muslim, as interim president.

Seleka rebels then reportedly attacked Christian homes, looted property and carried out summary executions, leading to the emergence of the Christian anti-balaka militia.

Ngaya, the leading militiaman, described the anti-balaka as a "popular resistance movement."

"When we founded the anti-balaka movement, our main objective was to fight against the seleka rebels because they were committing atrocities against the Christian civilian population," he said.

Hubert, a tall, dark militiaman in his early thirties, insisted that they were simply defending themselves.

"I joined the anti-balaka after seleka fighters attacked my father's home and looted our property," he told AA in Ngaissano's compound, wearing a faded yellow shirt and worn pair of jeans. "They also killed many of our neighbors."

A well-built militiaman in his late 20s – who called himself "Rambo" – said he had joined the group to defend his country against "foreign Muslim mercenaries."

"Most of the seleka fighters were foreigners; they were mistreating us in our own country," he said, wearing jeans and a flowered shirt. "So I decided to join the anti-balaka to free our country from foreigners."

Both men wore numerous magic charms, which have become a trademark of the anti-balaka militants.

Ngaya accused former president Djotodia, who stepped down in January under international pressure, of complicity in recent crimes against Christians.

"What angered us most is that Djotodia was quiet when his seleka rebels burnt Christian homes and granaries for storing food, looted property, and killed [members of] the Christian civilian population," he said.

"They did this for nine months," he added. "That was enough punishment for us to react."

Ngaya declined to reveal the number of anti-balaka militants.

But in a follow-up phone interview with Ngaissona, the anti-balaka leader said: "I can't give you the exact number of our fighters because they're all over the country."

"This is a popular resistance movement [consisting] of the majority of Central African citizens, who are against the foreign seleka mercenaries who have committed a lot of atrocities [against] our people," he added.

Ngaissona went on to deny that Bozize, his former boss, had helped finance the Christian anti-balaka militias.

"Bozize was president for ten years and cannot involve himself in supporting anti-balaka," he said.

The militia leader insisted that his group depended on contributions from members.

Ngaissona was evasive, however, when asked point-blank if his militiamen planned to stop killing Muslims.

Ngaya, for his part, accused peacekeepers of using "brutal" force to disarm his fighters.

"Peacekeepers came to our chief's home and fired live bullets and threw teargas canisters in the house," he told AA.

"They said they had come to disarm him," he fumed. "Is throwing teargas and firing live bullets what they call disarmament?"

"The peacekeepers don't know what they're looking for," Ngaya added. "They want to burn this country instead of bringing peace."

Some 1,600 French and 6,000 African peacekeepers are currently deployed in the mineral-rich, landlocked country.

A spokesman for African peacekeeping force MISCA declined to comment on Ngaya's claims regarding the use of brutal force to disarm Christian militiamen.

Ngaya also accused recently-elected President Samba-Panza of being behind recent raids by peacekeeping forces on the homes of anti-balaka leaders.

"We supported Samba's election; we gave her a chance to rule this country – and that's how she repays us!?" he said angrily.

The senior militiaman went on to warn that, if the anti-balaka started a war, Samba-Panza would fail to complete her transitional period.