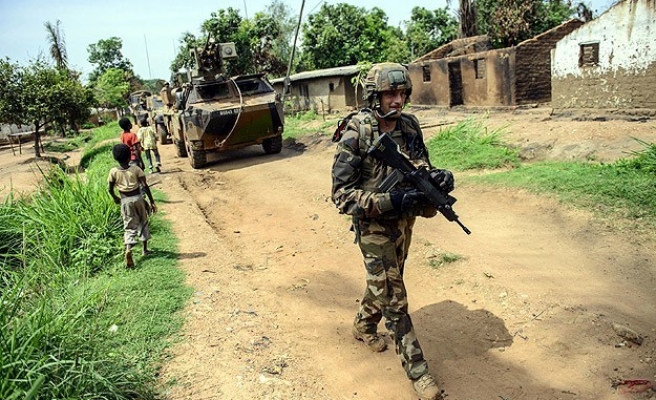 In a statement, they added that another nine militants had been injured in the clashes.

UN peacekeepers, for their part, did not report any casualties among their personnel.

On Tuesday, UN peacekeepers backed by French troops managed to recapture a number of government buildings controlled by seleka militiamen in Bria, a city in the country's north, according to a UN peacekeepers' statement issued the same day.

"The desire to recapture the buildings was faced with hostilities from the militia," peacekeepers said.

"International troops had to react in kind," they added, referring to airstrikes carried out early Tuesday with the aim of driving the militants from government buildings.

A number of Seleka militants escaped following the attacks and mixed with city residents, eyewitnesses told The Anadolu Agency.

On Wednesday, Prime Minister Mahamat Kamoun paid a visit to Bria, where he said government services in the city would "soon" be restored.

CAR descended into anarchy in 2013 when Muslim seleka rebels removed President Francois Bozize, a Christian who had come to power in a 2003 coup.

Djotodia stepped down early last year to be replaced by a Christian leader amid a wave of sectarian violence.

Since then, the country has been plagued by tit-for-tat violence between Christian anti-balaka militiamen and former seleka fighters.

The 12,000-strong UN mission in CAR (MINUSCA) began deploying in the country last year under a mandate from the UN Security Council.