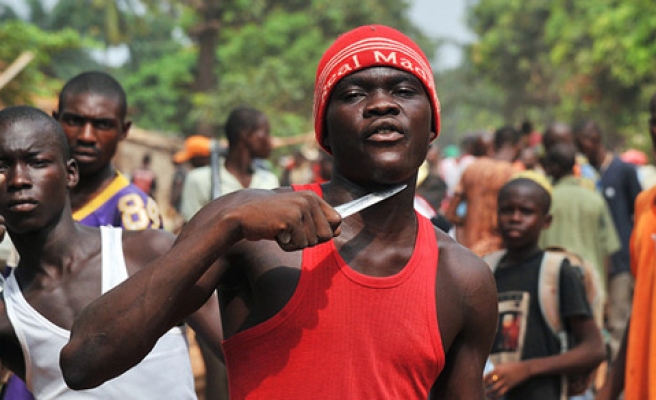 A "cattle war" is raging amid the sectarian violence bloodying the Central African Republic, with herds massacred by grenade or machine-gun, cows stolen, breeders kidnapped or murdered and reprisal strikes staged against rival villagers.

Trade in the livestock is a major source of income for around 300,000 people in the nation of five million, and constituted over 10 percent of GDP in the 2000s, according to the Food and Agriculture Organization of the United Nations (FAO).

The value of cattle has caused herds to be alternatively pillaged or massacred by raiders in virtually all sectors of the country's north and west.

That campaign has choked off supplies to the capital, Bangui, causing the PK 12 cattle auction and slaughterhouse to the north of the city to be shuttered.

"Herd figures have dropped by 77 percent compared to levels before the crisis, due to mass slaughter and theft," said the FAO.

The agricultural violence is the most recent reverberation of unrest following the March 2013 overthrow of President Francois Bozize by Muslim Seleka rebels in favour of their leader, Michel Djotodia.

Djotodia was forced to step aside in turn for failing to quell sectarian violence between Seleka members and Christian militias known as the anti-balaka, whose deadly clashes erupted in 2013 and 2014 across the country.

The primary human victims of the recent cattle war chapter of that conflict are Mbororo livestock farmers -- members of the Muslim Fula ethnic group caught between anti-balaka and Seleka hatred.

"When the anti-balaka arrived in the West they targeted the Mbororo and their animals. They used grenades to kill cattle, fired Kalashnikovs into herds and massacred our families. My entire herd of 300 cattle, my wife and four children were wiped out," said -- in that order -- Maloum Bi Issa, a cattle farmer who fled for Bangui after the attack.

"Before, there were cattle everywhere in the country," he said.

According to estimates by the Fula minority in Bangui, around a million cattle have been massacred or stolen, and about 1,000 livestock farmers killed from the country's total Mbororo population of 40,000. Thousands more breeders have fled with their herds for the neighbouring countries of Cameroon, Chad and Sudan.

The result has been reduced beef supplies, and a hungry market for those selling solen cattle.

"No one in Central Africa today can deny they've eaten beef sold by the anti-balaka," says a deputy prefect under the condition of anonymity.

"Entire neighbourhoods were supplied (that way), especially in north Bangui."

Some justify that trade as belated compensation.

"It's the fruit of the victory over the people who killed our parents, raped our mothers, our sisters, our wives, and destroyed our belongings," sais Severin Ndotiyi, a former anti-balaka militant also known as "Satan."

The flight of so many livestock farmers, however, has modified the way abuse is being meted out. According to an FAO inquiry, armed groups that no longer steal cattle are racketing breeders by demanding protection money in exchange.

"Some farmers are at times held against their will by the anti-balaka so they won't lose an important source of their revenues," the FAO said.

"When farmers manage to escape areas controlled by the anti-balaka, the latter don't hesitate to attack non-governmental organisations, livestock dealers and local populations to steal their belongings. Which poses real security problems."

The movement of displaced farmers has also disrupted land distribution in migratory herding zones. "Restored security will not mean an automatic return of breeders to their former areas," the FAO said.

Beef is highly sought after in a country where the meat is used in three-quarters of prepared dishes -- particularly in Bangui.

Cooked with coconut, cassava leaves, tomato or gooey "goussa" sauce, beef in CAR is served grilled or braised, and used in squash breads and other dishes. It is also smoked by the Fula for longer conservation.

Prior to the start of the virtually uninterrupted violence that began in 1990, "the number of cattle was close to that of the population," recalled Maurice Agoumaka, a former employee of the National Federation of Central African Livestock Farmers.

"Everyone used to say that each Central African had his own cow."