As violence rages against Muslims deep in the bush in the country’s southwest, children appear to be in many cases the only survivors. 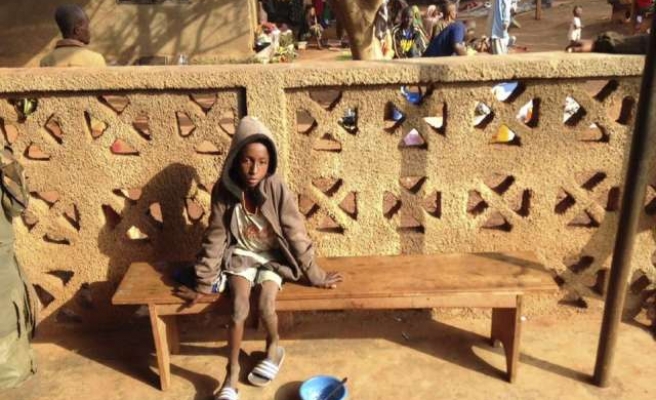 Over 15,000 people in Central African Republic, mostly Muslim civilians in makeshift camps, are surrounded and being threatened by armed militia groups, a spokesman for the U.N. refugee agency said on Tuesday.

Christian militia known as "anti-balaka", which means "anti-machete" in the local sango language, have exacted brutal reprisals against the Muslim minority. Ten of thousands of Muslims have fled to neighbouring countries, while others sought shelter in camps.

As violence rages against Muslims deep in the bush in the country’s southwest, children appear to be in many cases the only survivors.

Ibrahim Adamou’s parents had just been killed in front of him. He wasn’t sure whether any of his five siblings had survived the attack by Christian militiamen who opened fire on his family of herders as they journeyed on foot. The 7-year-old just knew he had to keep running.

Covering 100 kilometres barefoot and alone, he slept under the thick cover of banana trees at night and followed the red rutted paths by day, not entirely sure where he was going, with nothing to eat, Associated Press correspontent Krista Larson reports.

Finally he encountered peacekeepers who gave him some cookies and pointed the way to Carnot, where a Catholic church was sheltering some 800 Muslims, including many ethnic Peuls like Ibrahim. With the help of a Christian man on a motorcycle who risked his life by giving the boy a lift, Ibrahim arrived at the church early Monday.

What is even more remarkable about Ibrahim’s story is that there are at least six other children under the age of 10 with a nearly identical story in Carnot.  Many, like Ibrahim’s family, came under attack as they were fleeing west from violence earlier this month. The survivors are only now making their way to Carnot.

In Carnot, a town of about 45,000 some 500 km (310 miles) northwest of the capital, Muslims sought protection at a local church after hiding in the bush for several days.

Priest Justine Nary said that over 1,000 people, many of them women and children, had sought refuge in Carnot's church.

Nary said the mood was tense after anti-balaka militia threatened to torch the building if Muslims did not leave, despite the presence of AU and French troops.

"We received 223 more people this morning and the truck has gone out again to fetch more people from the bush where they are hiding," he said.

Around 10:30 on a recent night, a distressed Cameroonian peacekeeper knocked on the church door to wake up the priests. A little Muslim girl who didn’t know how old she was had turned up in the centre of town, barefoot and shaken. The priests emerged in their pyjamas to bring her inside.

Habiba, believed to be about 7, saw anti-Balaka militants kill her parents and her brothers, she whispered to a priest. They asked her where she came from: Her village was more than 80 kilometres away by foot.

Two men who had lost young daughters arrived at the door, then quickly shook their heads in disappointment. She was not theirs. No one knew who she was.

Ten-year-old Nourou said he spent two days being hidden by Christians, who then brought him to the church. Tears rolled down his face, some of them spilling from a crusted eye badly wounded in an anti-Balaka attack. His legs were so spindly he could barely stand.

Beside him was another Peul boy named Ahamat, believed to be about 8. He couldn’t say for sure how many days he had spent walking or when he last ate. The Muslim men who welcomed him asked about his village and then shook their heads in disbelief. It is some 300 kilometres away.

When he heard motorcycles on the road, he would hide in the woods. When the roads were empty, he just kept walking, asking anyone he could where he could find the peacekeepers who were guarding Muslims.

An Amnesty International report on Feb. 12 said attacks on Muslims in January by anti-balaka militias, made up of Christians and animists, had amounted to “ethnic cleansing.” Fatou Bensouda, chief prosecutor at the International Criminal Court at The Hague, has already opened a preliminary investigation into crimes against humanity, saying some “victims appeared to have been deliberately targeted on religious grounds.”