With its stunning rock formations remnant of a wet period in the region dating back to its ending 4,000 years ago, the Ennedi plateau is seen as a contender for a heritage listing with UNESCO. 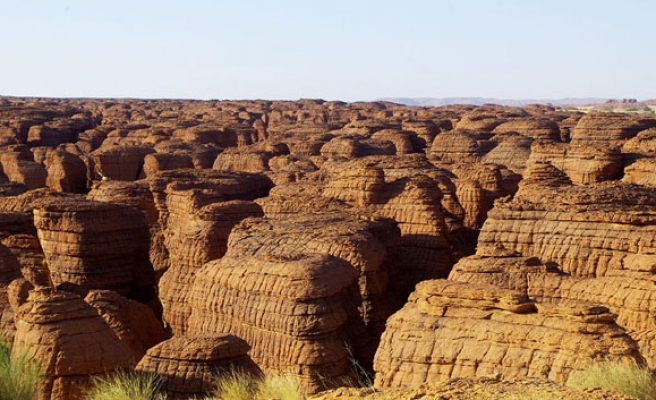 The path to Ennedi plateau in north east Chad is the last place that you would expect to see crocodiles, baboons or giant mazes made of rock in the middle of the Sahara desert. The little worn path is home to unique geological features and ancient lakes, remnants of the region’s wet period, which ended 4000 years ago.

Stefan Kröpelin at the University of Cologne in Germany travelled to the remote region last October with a small team to take samples at many sites for the first time. Kröpelin is also proposing the area should become a UNESCO World Heritage Site, a decision that will be made at the committee’s annual meeting in Istanbul next June.

This rock structure is called a Yardang, and is formed by wind erosion and is very common in the region.

Guelte Archei is an oasis where camels, after travelling long distances come to drink. It is also home to baboons, owls, crows, and small fish.

This rock formation is not called a labryinth for nothing - more then 4km of narrow winding passages is one of the most outstanding features of the region.

These engravings in the north west that depict fishing nets suggest that lakes existed nearby, providing a fishing source for those in the area.

Guelta Maya is another remote oasis, is about 40 metres wide, and is thought to have come from underground reserves.

This is the top of the Guelta Maya - below is the sound of crows and baboons, and droppings also suggest it is home to jackals and hyenas.

A toadstool made of rock, the result of windblow sand. The top layer of the rock is more resistant hence the mushroom like appearance.