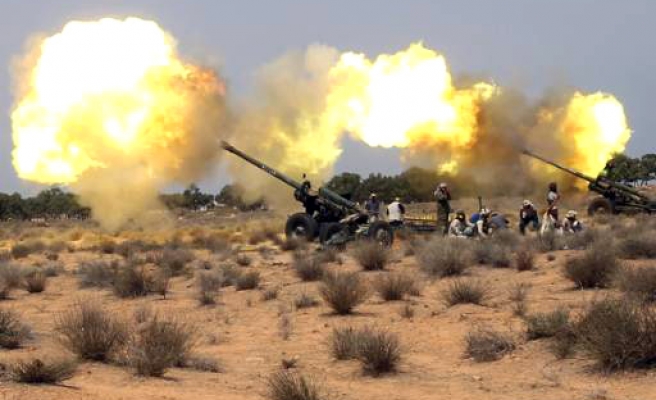 Battlefield bedlam has become part of daily life. Troops advance without orders. Nervous fighters shoot randomly. Where is the artillery? Who is in charge? No one knows.

Days of messy battles have failed to dislodge Muammar Gaddafi's loyalists form the desert enclave of Bani Walid, but commanders of the interim Libyan government's forces besieging the town say they are now determined to enforce order and discipline, and contain their unruly fighters.

"This has got to stop," Yunis al-Tumi, a senior field commander, said as he pointed at a group of boisterous fighters shooting in the air and trying to argue their way through a checkpoint to get to the frontline.

"We have received orders to stop all volunteer fighters from moving around without orders. That's it. The real war will start now."

Fighting here has spoiled any assumption that the National Transitional Council would quickly take control of the entire country after its forces overran Gaddafi's Tripoli headquarters on Aug. 23. Bani Walid has emerged as one of several towns still firmly held by Gaddafi's loyalists a month since he was deposed.

Gaddafi forces holed up in Bani Walid fought back tenaciously last week, taking advantage of the growing disarray plaguing the NTC fighters massing around the town.

After a botched attempt to take the town on Friday, anti-Gaddafi fighters have tried to regroup and enforce order among their ranks. But as fighting continued the frontline has become increasingly disorganised and the command structure murky.

On several occasions, infantry units have advanced into the treacherous hills of Bani Walid only to discover that artillery units had not yet been sent in.

In one incident, an entire unit was trapped inside for hours after dark amid heavy shelling by Gaddafi forces, unaware that an order had been issued for all troops to retreat.

Dozens of rag-tag groups of fighters have flocked to the Bani Walid front from all over the country.

Shooting in the air rebelliously from the back of their brightly painted vehicles and waving flags, their convoys are often seen sweeping in and out of the city on their own accord.

Speaking at a strategic checkpoint north of the city, Tumi said senior commanders had held a meeting overnight to discuss ways to change the situation.

"The national army and organised brigades will control the situation from now on. We have come up with a plan to prevent fighters from moving around without orders. That's not going to happen any more."

Choosing his words carefully, he added: "I wouldn't say it has been chaos, they are just very excited, they are raring to go forward. But now it's finished, that's it."

As he spoke to Reuters, the commander of a unit from the Tripoli suburb of Tajoura approached Tumi asking for permission to advance.

"No," Tumi replied sternly. "I know you are very excited and want to go, but we need to be better organised."

Despite the lack of progress on the front, fighters appeared cheerful, firing their grenade launchers and volleys of gunfire into the open desert, kicking up columns of dust on the horizon. A flock of camels looked on blankly.

Other fighters huddled together in circles against gusts of sandy wind, discussing plans and smoking cigarettes in the scorching midday sun.

"Now the plan is to send artillery first, trucks with anti-aircraft guns, then infantry soldiers," said Nasr Tahar, a fighter from the Souk al-Juma district of Tripoli.

Tumi said the NTC's military leadership was coordinating its actions with NATO, whose planes were monitoring their advance from the sky.

He said an aerial map of Bani Walid provided by NATO on Monday showed that Gaddafi forces were operating from a military base inside the city centre, comparing it to Gaddafi's stronghold of Bab al-Aziziyah in Tripoli which was overrun by rebels last month.

"They have many Grads (rocket launchers), tanks, mortars and sophisticated weapons. They have about 1,000 fighters, mercenaries, and snipers," he said. "Now the serious phase begins. Hopefully it will not take long."

He added that almost all civilians had now left Bani Walid, paving the way for the deployment of heavier weapons.