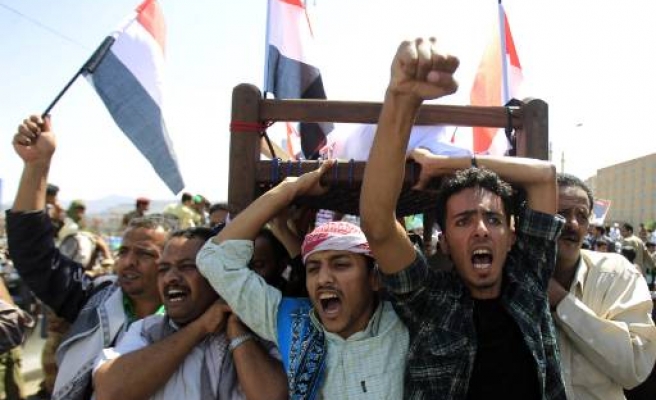 Explosions rocked the Yemeni capital Sanaa and clashes between government forces and soldiers backing protesters resumed on Thursday with time running low for a diplomatic solution to prevent the country from sliding into full-blown civil war.

Another anti-government demonstrator was shot dead and at least eight wounded by snipers just off "Change Square", where activists have camped out for eight months demanding an end to President Ali Abdullah Saleh's 33-year rule.

A ceasefire called by Yemen's vice president and acting leader earlier this week failed to hold for more than a few hours, lending greater urgency to diplomacy to end the bloodshed, which has killed some 86 people in five days.

"There are some initiatives being discussed for a political solution under the supervision of Jamal bin Omar and we hope these efforts succeed. Their failure will push this country into more violence," a high-ranking Yemeni opposition official told Reuters, referring to the U.N. envoy on the Yemen crisis.

In another sign of worsening conditions for a political solution, Gulf Cooperation Council Secretary General Abdbullatif al-Zayani left Sanaa empty-handed on Wednesday night after a two day effort to get a mediated power transfer plan signed.

That deal would see Saleh, who is recovering in neighbouring Saudi Arabia from a June assassination attempt, hand over power in a matter of months. He has already accepted it only to back out at the very last minute on three occasions.

Back in "Change Square", angry protesters set fire to a house where they said snipers were hiding, while medics set up a blood donation campaign to help the wounded.

Escalating confrontation between heavily armed supporters of Saleh and his opponents points to the worst-case scenario for diplomats struggling to finalise the power handover deal while Saleh convalesces in Riyadh.