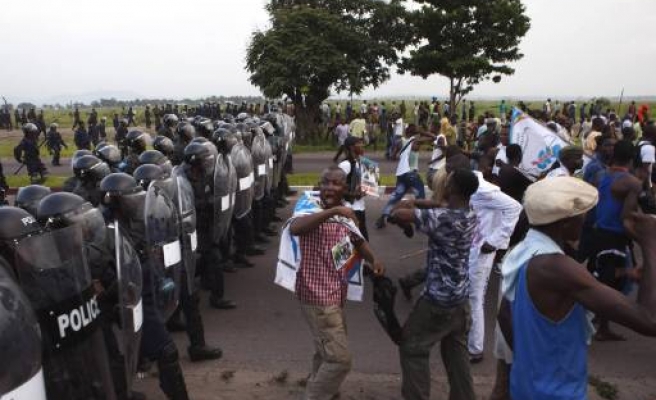 Security forces fired live rounds and tear gas at rock-throwing protesters in Democratic Republic of Congo's capital on Monday as opposition parties tried to block a change in the law that may delay elections due in 2016.

Smoke billowed into the air as tyres burned in the streets of Kinshasa, where police in riot gear and armed presidential guards were deployed.

The demonstrations are against a revised election law that requires a national census be carried out before elections, a move that could delay the polls by years and allow President Joseph Kabila to put off standing down.

The bill was approved over the weekend by the lower house of parliament and was due to be examined by the senate on Monday.

"We demand that Kabila leaves," said protester Jean-Paul Beya. "We think the people are getting there little by little and we will replicate Burkina," he said, referring to Burkina Faso, where Blaise Compaore was forced to stand aside as president late last year by rallies against a bid to stay in power.

Opposition parties said their leaders, who had called on followers to occupy parliament, were unable to join the protests as their offices were surrounded by security forces.

Critics call the reform a "constitutional coup" but the government says the census is a necessary part of the electoral process in the vast, mineral-rich country of 65 million people.

Kabila's rivals have so far struggled to mobilise large groups, partly because of fears of heavy-handed police tactics, and crowds have in the past been easily dispersed. Ahead of Monday's march, opposition leaders called on supporters to show more resistance and to fight back against police.

A witness in Matonge, a neighbourhood near parliament, said he saw police fire live rounds in the air in a bid to disperse people. Crowds later looted Chinese-owned shops in the area.

A Reuters reporter saw one person who had been shot in the shoulder being treated in Kinshasa's main hospital.

Police fired tear gas on a crowd of more than 1,000 people in the eastern city of Goma on Monday. A Reuters reporter saw at least two people with bullet wounds in the streets.

Tension over the election law comes as Congo's army and United Nations peacekeepers are preparing to attack Rwandan Hutu rebels that have been at the heart of nearly two decades of conflict in the eastern border zones.