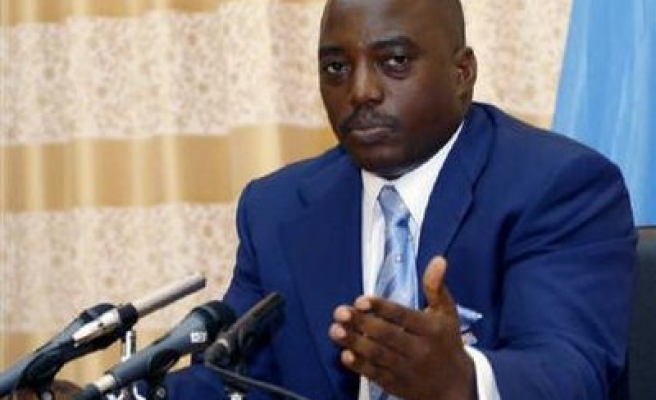 Democratic Republic of Congo's opposition parties are united in their demands that President Joseph Kabila should not stay in power when his term ends in 2016 but personal rivalries and infighting are hobbling efforts to mount an effective campaign.

The opposition has accused Kabila -- who has ruled the mineral-rich central African nation since 2001 -- of plotting to scrap a constitutional two-term limit and seek reelection, despite warnings not to do so from the United States and France.

After decades of one-man rule culminated in a war that killed millions between 1998 and 2003, many in Congo fear an attempt by Kabila to cling onto power could tip the nation into chaos.

Kabila has remained silent and his spokesman has said there is no reason to believe the 43-year-old plans to modify the constitution, although some supporters have asked him to do so.

But delays in organising local elections and the announcement of a population census, which would likely delay the 2016 vote, have fuelled concerns that Kabila is looking for ways to stay on in Africa's largest copper producer.

The Congolese opposition has stepped up its campaign, galvanised by protests in Burkina Faso in October that ousted president Blaise Compaore when he tried to extend his rule. Opposition leaders have organised demonstrations and taken to the airwaves to denounce what they see as a power grab.

But internal rifts and personal ambition are eroding the opposition's unity, undermining its ability to mobilise a credible response to the president, analysts say.

On Sunday, Kabila unveiled a long-awaited national unity government including three senior figures from the Movement for the Liberation of Congo (MLC), the second-largest opposition party.

Alongside a cabinet packed with loyalists, the defections were hailed as a sign Kabila was shoring up his position ahead of 2016. Though the three men were subsequently expelled by the MLC, it weakened the party's leadership and could diminish the impact of a possible return to politics by its founder, Jean Pierre Bemba.

Bemba, who was runner-up to Kabila in the 2006 election, is on trial at The Hague for war crimes in neighbouring Central African Republic but will be released if he receives a not-guilty verdict.

"It's a sort of pre-emptive strike ... to reduce Bemba's capacity to do harm if he's ever released," said Philippe Biyoya, a politics professor at Kinshasa University.

The opposition has been prone to squabbling and being co-opted by the ruling elite. In the 2011 presidential election, its failure to rally around veteran Etienne Tshisekedi was crucial to Kabila's re-election, amid widespread allegations of fraud.

"There are problems of internal cohesion within the opposition, whether it's between the various opposition groups or within the main opposition parties," said Jason Stearns, a Congo analyst.

In the absence of the 81-year-old Tshisekedi -- who has been in Belgium since August for medical treatment -- others have vied to lead the opposition.

Kamerhe has joined forces with Bruno Mavungu, the secretary general of Tshisekedi's Union for Democracy and Social Progress (UDPS), to lead a series of marches in Kinshasa. Their collaboration has provoked bitter recriminations in the UDPS, with Mavungu disavowed by senior party officials.

Meanwhile, Kamerhe's former ally Martin Fayulu, a parliamentarian and coordinator of the "Let's Save DRC" platform, accused him of trying to monopolise the leadership and split with him.

Amid the internal wrangling, the opposition has yet to prove it can mobilise people. Its largest demonstrations in recent months have attracted a few thousand people in Kinshasa, a city of more than 10 million.

While there is discontent with Kabila, his security forces' reputation for brutality deters many people from taking to the streets. "People are afraid of the police," said Fidel Landu, a security guard. "You march, they shoot."

Opposition leaders insist the underlying discontent with Kabila, in power since the assassination of his father Laurent-Desiré in 2001, could be tapped at the right moment.

But given the opposition's weaknesses, analysts expect the Catholic Church and civil society to play a significant role in blocking any bid by Kabila to hang on. Congo's bishops have spoken out against an extension of Kabila's mandate in a country where 40 percent of its 65 million people are Catholic.

Pascal Kambale, former Congo director for the Open Society Initiative for Southern Africa, said it was too soon to judge the opposition's clout until the government made a move.