Human rights groups say that Copts, who account for six to 10 percent of Egypt's 85 million people, faced attacks mainly in the provinces of Minya and Assiut in central Egypt. 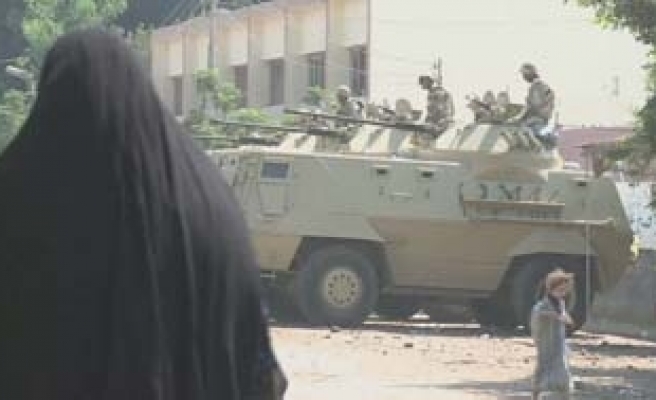 Sameer Hanna, an Egyptian Copt, returned to his home in the town of Delga a week ago, but only to find it torched and looted by masked men.

"Hundreds of them attacked our homes, many of them wearing masks. My home was looted, set on fire and destroyed," said Hanna, a 43-year-old famer, inside his gutted house.

The relentless attack, which also killed a Coptic barber, has left a deep wedge between the town's 120,000 Muslims and Christians who until now had lived peacefully in this mainly farming Upper Egyptian town.

More than 100 Christian families fled their homes, some leaving the town after the attack.

"When we fled, it was my Muslim friend at whose house (in the town) we stayed. We trust him, but we are afraid and insecure as we can't trust everybody in the town now," said Hanna, indicating that some of the attackers were locals, and others came from elsewhere.

"We fear for what could happen after the army leaves."

Egyptian troops stormed Delga, located 400 kilometres (250 miles) south of Cairo, on September 16 to flush out Islamists, many of them supporters of ousted president Mohamed Morsi, according to media reports.

The Islamists were enraged by a bloody army and police crackdown in Cairo on August 14 on Morsi's supporters.

Islamists accuse Coptic Christians of backing the military that toppled Morsi, who belongs to the Muslim Brotherhood and was the country's first democratically elected head of state.

This perception was fuelled by the appearance of Coptic Pope Tawadros II alongside army chief General Abdel Fattah al-Sisi when he announced on television Morsi's removal from office. Muslim leaders and politicians were also present.

Human rights groups say that Copts, who account for six to 10 percent of Egypt's 85 million people, faced attacks mainly in the provinces of Minya and Assiut in central Egypt.

The US-based Human Rights Watch says that more than 40 churches have been attacked in Egypt since August 14, including 11 in Minya and eight in Assiut.

Delga's Coptic priest Yuannas says it will take a long time before the wounds inflicted on the town's Christians heal.

"We always had our quarrels, but we used to end them before sunset. But what has happened now will take a long time to heal," Yuannas said, showing the destruction of the town's monastery and three churches.

"On the first day about 2,000 people attacked the monastery and the churches. They set fire to the buildings, stole many artefacts, and also dug in the ground, thinking they may find some treasure. It was brutal," he said, pointing to a gaping hole which used to be a dome of the Blessed Virgin church, one of the damaged churches.

The Blessed Virgin church, said to have been built in the fifth century, was constructed in a cave.

"The violence stopped only after troops came. If you want trust to return, such things must not be repeated. The authorities must step up reconciliation efforts," Yuannas said.

Several Muslim residents who spoke to AFP hope that with time the situation would improve.

"I helped my friend Sameer. I am a Muslim and it is my duty to help those facing injustice. This is what Islam teaches. But I know it is not easy to rebuild" lost homes, said Taufiq Zaki, a butcher.

The town itself is slowly returning to normalcy under the watchful eye of troops mostly stationed around the local police station.

Shops are open, vendors and buyers conduct brisk trades in the market, streets are full of children running behind mule-carts, while farmers drive their tractors and trucks loaded with onions -- a key crop in the area.

But a look at Hanna's two-storey house shows why it will take a long time before the two communities bury what happened in August.

Smoke blackened walls, smashed windows, a broken television set and piles of debris in the five rooms of his house were proof of the fury unleashed by attackers.

"Who is going to pay for this now? How do I rebuild?" laments Hanna as he looks at his three children clawing in piles of debris inside their broken home.