She said she did not believe "at all" it had been a spontaneous revolution born out of youth frustration. 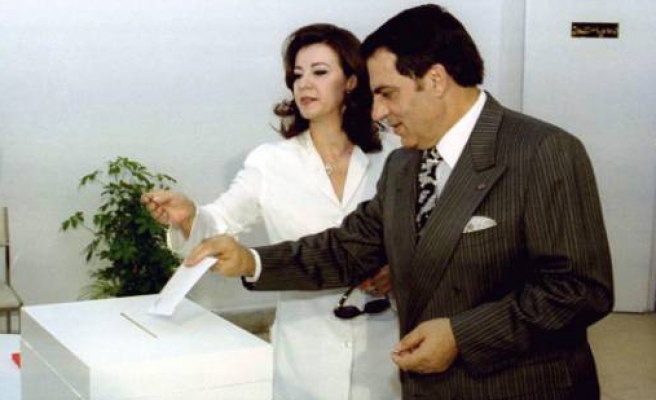 Tunisian leader Zine al-Abidine Ben Ali was ousted by an "orchestrated" coup but would be ready to face a "fair" trial in his homeland, the former president's wife said in an interview with French daily Le Parisien published on Sunday.

Ben Ali, who fled with his wife to Saudi Arabia as protests swept Tunisia on Jan. 14, 2011, has already been sentenced in his absence to decades in jail for the killing of hundreds of protesters in the central towns where the Arab Spring began.

"I wouldn't describe them as protests," Leila Trabelsi told Le Parisien in what it said was her first interview since leaving Tunisia.

"For me it was an orchestrated, masterminded and planned coup d'etat, but I don't know who led it."

She said she did not believe "at all" it had been a spontaneous revolution born out of youth frustration.

The newspaper said the interview was carried out via Skype from Ben Ali's secret location in Saudi Arabia.

Tunisia's government has faced persistent criticism over its failure to persuade Riyadh to hand over Ben Ali and Trabelsi, a former hairdresser whose lavish lifestyle and clique of wealthy relatives had come to be seen by many Tunisians as symbols of Ben Ali's corrupt rule.

The former president has also been charged with crimes ranging from corruption to torture.

Trabelsi denied the accusations her husband had ordered the shootings of over 300 people in last year's revolution.

She also questioned why the Islamist-led government that swept to power in Tunisia last year had refused to allow telephone recordings between Ben Ali and the defence and interior ministries to be handed over as evidence.

"I can only regret the loss of life and I offer my sincere condolences to those families," she is quoted as saying.

Riyadh has declined to comment on Ben Ali's extradition and there have been consistent rumours about his health.

Le Parisien said the 75-year-old had briefly shown himself behind his wife during the interview wearing a white polo shirt.

Trabelsi, who admits there could have been more political freedom during her husband's rule, read a message from him saying he regretted Tunisians had forgotten that under his 23-year-rule the country had modernised and everybody had seen their standard of living improve.

"We are ready to face justice as soon as it is fair and without excesses or favours," said Trabelsi, whose book "My Truth" was released last week.

"Sadly, that is not the case today."

Speaking of events on the day they left the country, she said that at no point had they envisaged leaving for good and that her husband had called her suggesting they travel to Saudi Arabia for a pilgrimage to "let things calm down."

"My husband was already at the airport and (security chief) Ali Seriati did everything to convince him to leave even though he didn't want to. We had no luggage, money or passports," she said.