The Syrian Revolution Coordinating Union said most casualties in Sunday's attack on Deir al-Zor were in al-Joura district in the west of the city. 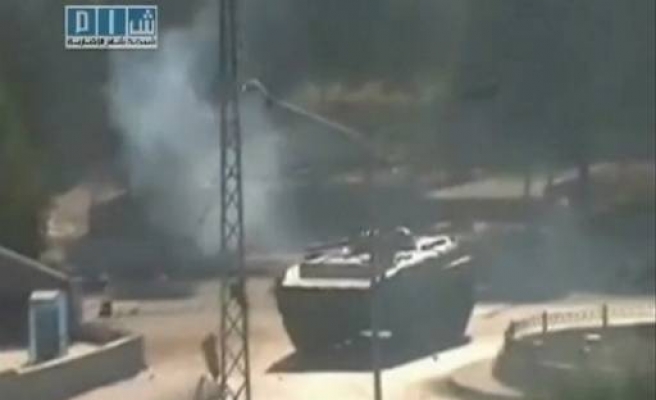 Syrian troops killed 20 people in a tank assault on the eastern city of Deir al-Zor on Sunday, an activist group said, despite a direct U.N. appeal to President Bashar al-Assad to stop using military force against civilians.

The assault on Deir al-Zor, capital of a restive oil-producing province, began exactly a week after Assad sent the army to seize control of the city of Hama, a focal point of nearly five months of protest against his autocratic rule.

The Syrian Revolution Coordinating Union said most casualties in Sunday's attack on Deir al-Zor were in al-Joura district in the west of the city.

A resident told Reuters: "Early this morning columns of army tanks and bulldozers, under cover of heavy rounds of gunfire, stormed into the western and northern entrances of the city and dismantled barricades set up by residents.

"A dozen tanks are taking position in the main square in Jubaila market in the northern sector of Deir al-Zor," the resident, who gave his name as Abu Bakr, said by telephone.

Syria has barred most independent media since the start of the uprising against Assad, making it hard to verify accounts from residents, activists and authorities.

The military assault on Deir al-Zor, about 400 km (250 miles) north-east of Damascus, was launched a day after U.N. Secretary General Ban Ki-moon told Assad he was alarmed by the escalating violence and demanded he rein in the army.

"In a phone conversation with President Assad...the Secretary General expressed his strong concern and that of the international community at the mounting violence and death toll in Syria over the past days," the U.N. press office said.

Ban "urged the president to stop the use of military force against civilians immediately", it added.

Residents of Deir al-Zor, situated on the Euphrates river in a province bordering Iraq's Sunni heartland, had been bracing for an assault on their city.

A video posted on the Internet last week showed a tribal meeting discussing preparations for armed resistance to any military move against them.

Several hours after the tanks moved in, explosions could be heard during telephone calls to residents in al-Joura.

Abu Bakr, from the Jubaila area which has seen some of the largest anti-Assad demonstrations in recent weeks, said mosque loudspeakers were blaring "Allahu Akbar (God is greatest)".

Turkish Prime Minister Tayyip Erdogan, who built close ties with Assad before the uprising, said on Saturday his foreign minister would visit Damascus on Tuesday to deliver a message to Syria. Turkey has grown increasingly critical of Assad and a senior minister last week called the attack on Hama an atrocity.

Tanks and armoured vehicles deployed throughout Hama on Saturday, a resident said, after a week-long assault which one activist group said had killed 300 civilians.

Syrian authorities blame the violence on gunmen and religious extremists they say have killed 500 police and soldiers since March. They say the army swept into Hama to confront "armed terrorist groups" attacking civilians and sabotaging property, and that 20 soldiers have been killed.

Hama stands as a symbol of defiance to the Assad family due to the 1982 uprising and because, until Bashar al-Assad sent in the tanks to crush the latest protests, it was the scene of some of the biggest demonstrations against his rule, with more than 100,000 gathering on Fridays to chant for his overthrow.

In their first public comments about the bloodshed, Gulf Arab States expressed the "greatest concern and regret" on Saturday over the "increasing violence and excessive use of force" in Syria, but did not directly criticise Assad.

Seeking to contain their own domestic dissent, and wary of any turmoil on their northern flank, the wealthy oil exporting Gulf states had previously kept silent on Syria.

A statement by the six-nation Gulf Cooperation Council called for "an immediate end to violent actions and any armed activity, an end to the spilling of blood, recourse to wisdom, and carrying out serious, necessary reforms".

Rights groups say Syrian security forces have killed at least 1,600 civilians since the start of the protests, inspired by Arab uprisings which overthrew leaders in Egypt and Tunisia.