Forests the size of U.S. state of Delaware destroyed every two years 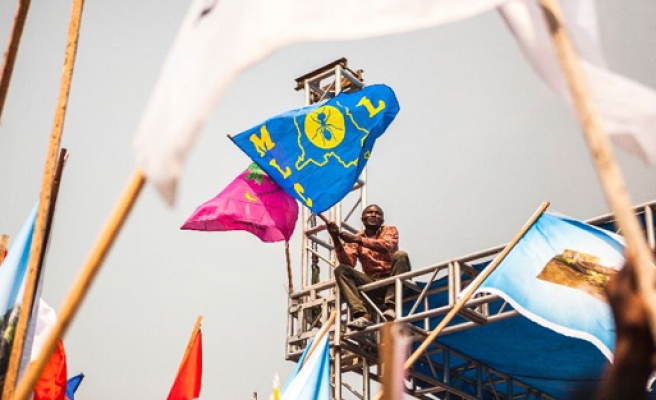 Deforestation in the Democratic Republic of Congo has become a pressing domestic and transnational issue with potentially high environmental costs.

According to the UN Environment Programme, the direct causes of deforestation in the DRC are slash and burn agriculture, the collection of fuelwood and charcoal, illegal logging and road infrastructure development.

Charcoal and fuelwood collection are considered a key driver of deforestation as it used for most of the population’s energy needs, it said. Together with illegal logging, it contributes to climate change domestically and in the region as a whole, according to environmental experts.

A forest officer in Kinshasa, James Tweho, told Anadolu Agency that only about 10 percent of the population has access to electricity, so about 90 percent use firewood and charcoal to cook food, endangering the forests.

Tweho said rising demand has turned the country's charcoal trade into a lucrative business which many young people are turning to in order to earn a living.

He said illegal logging also brings in a lot of money.

“The big trees being cut are worth exporting and take nearly a century to mature. They contribute a lot to the ecosystem and climate. But those cutting them down don’t care about that as long as they earn some money,” he said.

He said that among the endangered trees being indiscriminately cut down and exported are Afrormosia, Milicia excelsa and Bloodwood. Their wood is in high demand and sold at high prices in developed countries.

Tweho said trees cut in the DRC by illegal loggers are transported from deep in the forests to neighboring countries on the coast of Africa, especially Tanzania, Namibia and South Africa. From there, they are reportedly exported to Europe and Asia.

The tropical forests of the Congo Basin are the second-largest in the world, surpassed only by the Amazon rainforest in South America.

According to the UN Food and Agriculture Organization, since 1990, the rate of deforestation in the DRC has remained at 0.20%, which equates to the loss of 311,000 hectares or about 1,200 square miles annually. This amounts to destroying forests the size of the U.S. state of Delaware every two years.

A number of environmentalist and wildlife organizations say the DRC is rife with illegal logging and trees are disappearing fast. The trees being cut down have been around for many years, so when they are cut, they grow back extremely slow.

Although those involved in illegal logging and making charcoal believe what they are doing is profitable, agriculturalists and environmentalists say the trade is killing off trees that moderate climate change and sustain the local ecosystem.

“Those cutting down trees are destroying the environment and contributing to negative climate change,” said Philip Kililyo, a meteorologist in North Kivu.
Kililyo added that countries bordering the DRC have been benefitting from its forest ecosystem because they have depleted most of their forests. A local leader in Aru territory, William Aleku, said poverty plays a big role in driving young people to get involved in cutting down trees.

“Most young men in the DRC are unemployed. They use axes to cut down huge trees which they sell off [at a low price] to dealers. The dealers, after removing the logs from the forest, sell [them at a much higher price],” he said.

He said in order to stop young men from cutting down trees, the government should provide them with jobs.

Although the DRC is endowed with many minerals, it is one of the world's poorest countries. According to the World Food Programme, out of its over 80 million people, 48 million survive on less than US$1.50 a day.

Wildlife that depends on forests for their habitat and tree leaves for food are also being affected.

Gorge Makwela, a wildlife ranger in eastern DRC, said cutting down trees has greatly affected the endangered animals living in the forests, including baboons, elephants, monkeys and some reptiles.

“The wild animals depend on forests for habitation and feeding, so destroying forests means killing the wildlife,” he said.