Thousands of people performed their Ramadan Feast prayers at the Suheda Square on Wednesday after Tripoli was captured by opposition forces. 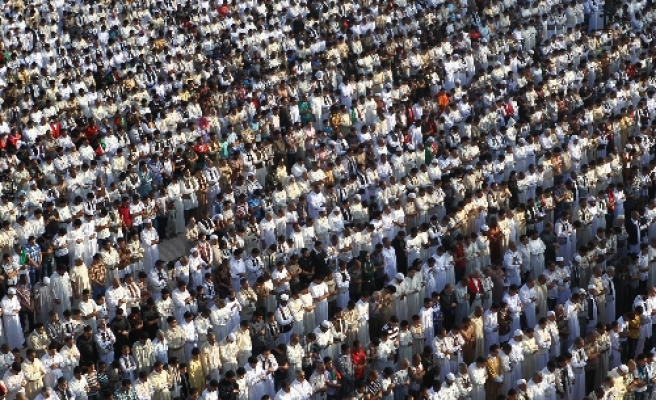 Thousands of people performed their Ramadan Feast prayers at the Suheda Square on Wednesday after Tripoli was captured by opposition forces.

Libyans welcomed the Ramadan Feast a day later than Turkey on Wednesday.

Thousands of Libyans began to gather at the Suheda Square early on Wednesday.

Tight security measures were taken at the Square as people began to wait for the Ramadan Feast prayer sitting on carpets.

The Libyans performed their prayer with Imam Abdulbasit Weila.
Speaking to the Libyans, Weila said that they were thankful to God for throwing Gaddafi and his forces out of Tripoli during the holy month of Ramadan.

We will soon capture other sites where Gaddafi forces remain, Weila stressed.

We have given thousands of martyrs in clashes for months. The relatives and friends of the martyrs should not cry as our martyrs lost lives for the freedom of Libya, Weila said.

Gaddafi was a bad leader and administrator for 42 years. From now on, our country would be more free and democratic, Weila said.

Many Libyans cried after the prayer, embraced each other and left the Square peacefully.