Two policemen went on trial charged with the illegal arrest and torture of an anti-corruption activist who died in their custody. 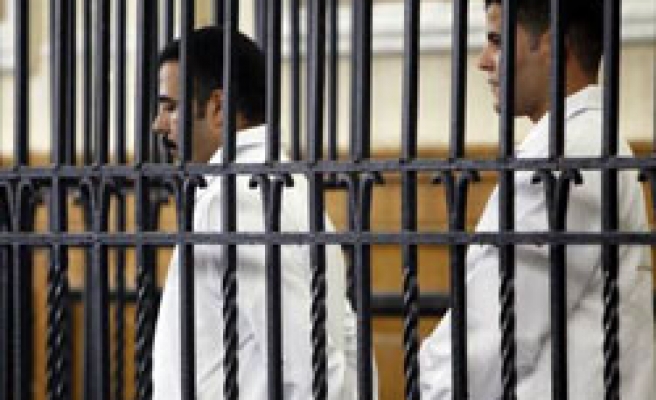 Two policemen went on trial on Tuesday charged with the illegal arrest and torture of an anti-corruption activist who died in their custody, in a case that has drawn protests at home and abroad.

Awad Suleiman and Mahmoud Salah are accused of mistreatment of Khaled Said on June 6 in the northern coastal city of Alexandria.

If convicted the pair face up to 15 years in prison, but neither has been charged with direct responsibility for Said's death. His family's lawyers vowed in court to push for charges of murder to be brought.

Judge Moussa al-Nahrawy adjourned the hearing until September 25 without setting bail for the two suspects.

Said had posted an Internet video purportedly showing the two policemen and others sharing the spoils of a drug bust.

Witnesses and rights groups say the policemen dragged Said out of an internet cafe and beat him to death. Egyptian authorities say, after two autopsies, that he choked to death on illegal drugs he had swallowed.

Photographs of Said's battered face and body quickly spread via the Internet and protesters have held demonstrations in cities across Egypt, with one in Alexandria attended by possible presidential contender Mohamed ElBaradei.

The case has become a rallying point for Egyptians who feel security forces act with impunity under emergency law allowing indefinite detention and curbing anti-government activity. It has also raised concerns among Egypt's U.S. and European allies.

The two accused stood in cages in the Alexandria Criminal Court, surrounded by plain-clothes police.

Around 50 men stood outside the court chanting and holding banners in support of police, a line of black-clad police separating them from a similar number of people chanting in support of Said. At least 10 large police trucks stood by.

Amnesty International said a friend of Said who had been gathering information in the case was last week beaten up and warned off by nine attackers armed with knives.

"If justice is to be done in this case, the Egyptian authorities must ensure that the witnesses to (Said's) beating as well as the dead man's family and those working to bring out the truth are protected from threats, violence and intimidation, and feel able to freely testify in court," the rights group said in a statement.

Said's uncle Ali Mohamed Kassem, accompanying his mother, sister and other relatives to court, said the family had no immediate comment.