On Friday, a group calling itself the "Youth of the Land of Egypt" claimed responsibility for the attack on the naval vessel, declaring that it had captured the eight missing troops 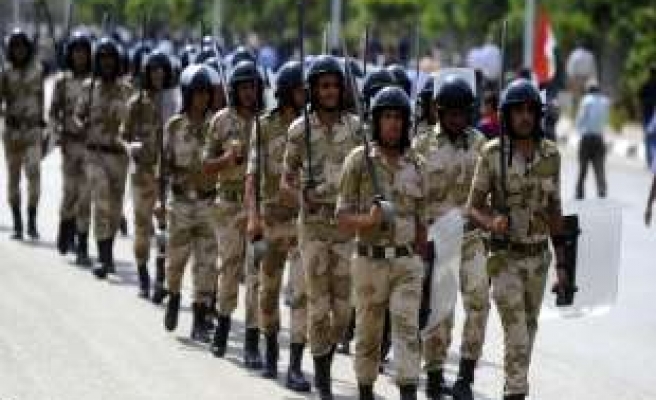 An Egyptian military source Friday refuted claims that naval personnel had been captured during a Wednesday "terrorist attack" on an Egyptian naval vessel.

"It is not true that a terrorist group kidnapped Egyptian military personnel," the source, who requested anonymity, told Anadolu Agency.

"If this were true, why hasn't the group released the names and pictures of those it kidnapped?" the source asked.

The source refrained from revealing any information on the eight troops who the army reported missing after Wednesday's attack.

On Friday, a group calling itself the "Youth of the Land of Egypt" claimed responsibility for the attack on the naval vessel, declaring that it had captured the eight missing troops.

The group made the announcement in a video recording featuring four masked men against the backdrop of a flag associated with the ISIL militant group.

Anadolu Agency could not confirm the authenticity of the video.

The military source also denied allegations that an Egyptian naval officer had been involved in the attack – an assertion that has been made by several websites and social media commentators with known militant affiliations.

He added that the perpetrators, who purportedly belong to an Egyptian group that has sworn allegiance to the ISIL, had planned to attack an Egyptian naval vessel that they thought was carrying 200 soldiers to the Sinai Peninsula.

On Wednesday, army spokesman Mohamed Samir said in a Facebook statement that eight naval troops had gone missing after militants opened fire on their vessel off the northern port of Damietta.

The navy had arrested 32 attackers and destroyed four of their boats, according to Samir.

At least five troops were injured in the incident, which the local media described as an "unprecedented terrorist attack."

Search operations had since been launched for the missing personnel, he added.

According to an earlier statement by the Defense Ministry, militants on several fishing boats had opened fire on a navy gunboat on a "combat" mission in the Mediterranean Sea.

It was the first attack of its kind on the Egyptian navy since last year's ouster of Mohamed Morsi – the country's first freely elected president – by the army.