Mohamed Tareq, a lecturer at the Faculty of Sciences in Alexandria University, was arrested at his house in a raid that also saw his laptop seized 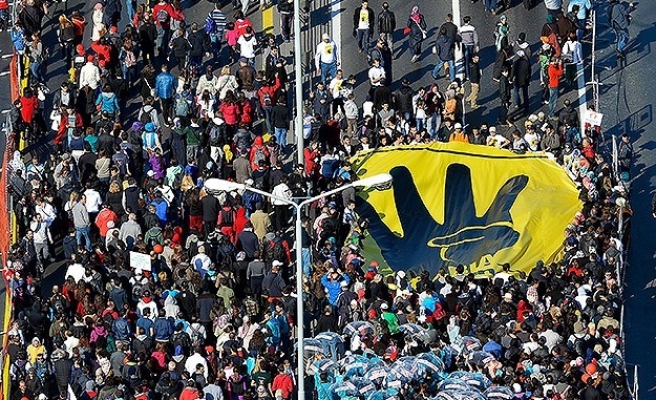 Egyptian security authorities have arrested one of the eyewitnesses whose account was cited in a recent report by international rights watchdog Human Rights Watch (HRW) about last year's dispersal of the eastern Cairo Rabaa Al-Adawiya sit-in.

"Mohamed Tareq was arrested in Alexandria late Friday, and was interrogated by the prosecution on Saturday," a source close to the activist told Anadolu Agency on the condition of anonymity.

Tareq, a lecturer at the Faculty of Sciences in Alexandria University, was arrested at his house in a raid that also saw his laptop seized, the source said, noting that Tareq was one of the protesters who joined the Rabaa sit-in until its dispersal on August 14 of last year.

Several friends of Tareq have confirmed the news of his arrest of his Facebook account, with cyber-activists launching an online campaign calling for his release.

Earlier this month, the HRW, a prominent New York-based watchdog, called for a U.N. inquiry into what it has described as the "massacre" by Egyptian security forces of at least 1150 supporters of ousted president Mohamed Morsi – including at least 817 in Cairo's Rabaa al-Adiwiya Square alone – saying the killings likely constituted crimes against humanity.

The Egyptian government has dismissed the HRW report as "politicized" and "biased." Cairo also reiterated that the use of force by security personnel had come in response to violence – including the use of firearms – by protesters.

The Egyptian authorities have not commented yet on Tareq's arrest. The HRW is also yet to comment.

In his account, Tareq said that security forces were “arbitrarily shooting all around” during the violent dispersal. He himself was hit by three bullets, one in his arm, one that went into his back and through his chest, and a third that struck him in the side, he said.

Tareq went on to say that he was one of hundreds of demonstrators that were unable to receive necessary medical attention for hours at the field hospital in the square "as doctors struggled to deal with the influx of injured protests after the dispersal began."

HRW asserted in its report that Egyptian authorities had failed to hold even a single low-level policeman or army officer accountable for any of the violence – let alone the officials responsible for ordering them – and continued to brutally suppress dissent.

The rights group further confirmed in its report that some pro-Morsi demonstrators had used firearms in a few cases, but added that this did "not justify the grossly disproportionate and premeditated lethal attacks on overwhelmingly peaceful protesters."

Thousands of Morsi's Muslim Brotherhood members and sympathizers – along with a number of secular activists – have been arrested and convicted on multiple charges.