Egypt's Supreme Constitutional Court said it had overruled President Mohamed Mursi's decision to recall the parliament that was dissolved by the country's generals last month. 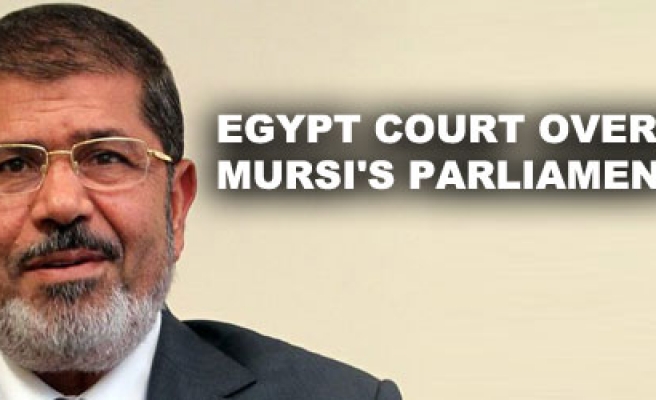 Egypt's Supreme Constitutional Court said on Tuesday it had overruled President Mohamed Mursi's decision to recall the parliament that was dissolved by the country's generals last month.

The ruling heightened a confrontation between the newly elected head of state and an establishment that once served the man he replaced, ousted president Hosni Mubarak.

The court ruled on June 14 that laws under which parliament was elected were unconstitutional. Egypt's then-ruling military council dissolved the assembly two days later. But Mursi issued a decree this week recalling parliament, which met on Tuesday.

"The court ruled to halt the president's decision to recall the parliament," the head of the constitutional court, Judge Maher el-Beheiry, said in court.

The detailed ruling, published by state media, said the court's verdicts were final and could not be appealed and that both its rulings and their interpretations are binding on "all the state's authorities and everyone".

In addition, it said its June 14 decision had declared "the whole (lower house of) parliament void" because the election was based on unconstitutional laws. It added parliament was "non-existent by the power of the law since that date, without the need to take any other measure".

It described Mursi's decision to recall the parliament as an "obstacle that stands against the execution of the previous verdict of the constitutional court".

The Brotherhood had said they accepted the June 14 ruling, but challenged the army's decision to dissolve parliament, saying it should be allowed to continue work until a new one is elected after a new constitution is written and passed by referendum.