"Judge, wake up! Mubarak killed my brothers! Execute the killer!", shouted some in the crowd. 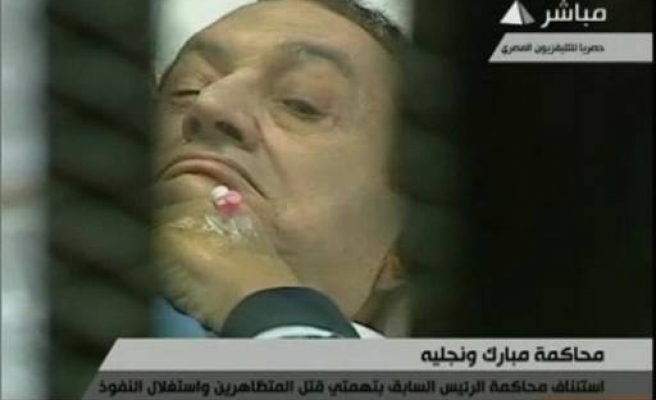 The judge presiding over the trial of Hosni Mubarak on Monday ordered TV cameras out of the courtroom until the case concludes, enraging opponents of the deposed president who vowed to challenge the decision with protests in downtown Cairo.

Mubarak is the first head of state overthrown during a wave of uprisings in the Arab world to appear in court and the TV coverage has gripped audiences across the Middle East. A public trial was a key demand of protesters who had camped in Cairo's Tahrir Square for weeks in July to press for a swift hearing.

"Preposterous!" said Sherif Mohamed, an engineer who was watching the trial outside the court building in Cairo. "The case is necessary for public opinion. Not airing it live means there is a deal with Mubarak."

"To Tahrir -- that is where I am going now. People power is stronger than people in power," said Mohamed Ali, 35.

Mubarak stands accused of authorising the use of live ammunition to shoot protesters, of corruption and abuse of power. Judge Ahmed Refaat ordered the trial be merged with that of Mubarak's Interior Minister Habib al-Adli and six others who face similar charges in order to streamline the processes.

Supporters and opponents of Mubarak threw stones at each other and fist fights erupted near the court, set up in a police academy building in a Cairo suburb, as Mubarak flew in by helicopter for the second day of his trial and was wheeled into the courtroom's steel cage on a hospital bed.

The crowd lunged forward as Mubarak arrived and his supporters hurled stones at a group of protesters who demanded the death penalty for the 83-year-old.

The crowd broke through a cordon formed by hundreds of riot police and the Mubarak supporters chased their opponents away from the court building. One protester attacked a policeman. Then police jumped on him and beat him.

"Judge, wake up! Mubarak killed my brothers! Execute the killer!", shouted some in the crowd.

In a courtroom packed with more than 150 excited lawyers, Mubarak looked composed and stern, hands clasped over his chest. An intravenous needle was implanted in his left hand. He was not wearing the regulation white uniform of prisoners.

Mubarak spent much of the session with his eyes closed and often yawning, and some observers said he looked weaker than at his last appearance. "His health is a little bit worse it seems... His sons kept bending over to explain to him what's going on," said military analyst Safwat Zayaat.

Mubarak exchanged a few words with his sons Alaa and Gamal, also standing trial, and spoke up to state his presence. The sons sought to shield him from cameras and one of them kissed Mubarak on the forehead to comfort him.

Ousted on Feb. 11, Mubarak fled Cairo to the Red Sea resort of Sharm el-Sheikh. Medical reports issued after he was taken to a hospital following initial questioning in April said he was suffering from heart problems, depression and fainting.

"I want people to read their history and know what this great man has done for us. He kept Egypt stable. He has been humiliated but he is weathering the storm with pride," said Ehab Sameh, 30, outside the court.

For generations, Arab leaders ruled for life and were seldom held to account, but if found guilty of ordering the killings, Mubarak could in theory face the death penalty.

Some 850 people were killed in the uprising and more than 6,000 wounded when security forces fired live rounds, rubber bullets and water cannon, and used baton against protesters.

Judge Refaat postponed the hearing until Sept. 5 after Mubarak's lawyer Farid al-Deeb requested time to view all the documents submitted to court.

Lawyers were split over whether suspending television coverage of the trial was a good thing. Monday's session was marked by rowdy exchanges and scuffles between the dozens of lawyers who pressed towards the bench to make their demands.

"The Egyptian public needs a transparent trial at this stage. If they cannot see what is happening, rumours will circulate and the degree of vagueness surrounding the trial will increase," said plaintiff lawyer Mahmoud el-Khoudary.

"It is understandable to cut live feed of this sensational trial," said Ahmed Hamrawi, a lawyer for some of the plaintiffs. "There are lawyers who are more concerned about appearing in front of the camera than putting up a good argument ... From now the trial session will be more focussed and less chaotic."

Risks if trial drags on

Egypt's ruling military council has promised a transition to democracy in the Arab world's most populous country -- a process far from complete and, the pro-reform camp says, vulnerable to high-level obstruction.

Judging and punishing Mubarak swiftly could assuage the population and ease a peaceful transition to civilian rule.

But with so many witnesses, lawyers, plaintiffs and varied charges, it could drag on for months or years.

The cases of the defendants are interlinked and each could accuse his superior of giving the orders to fire, thus weakening the case against Mubarak, said Essam Soltan, a lawyer for the plaintiffs lawyers.

In the first court session on Aug. 3, lawyers asked for the head of Egypt's ruling army council, Field Marshal Mohamed Hussein Tantawi, former intelligence chief Omar Suleiman and about 1,600 others to testify as witnesses.

Lawyers have also called for Tantawi, who was defence minister for two decades under Mubarak and heads the military council, to appear as a witness.

Mubarak's defence counsel says testimony by Tantawi on Mubarak's role in trying to suppress the 18-day uprising could decide the ex-president's fate.

"Tantawi's testimony would help the court determine whether Mubarak gave orders to Interior Minister Habib al-Adli to fire at protesters or whether Adli was acting independently," said a member of the defence team, who asked not to be named.