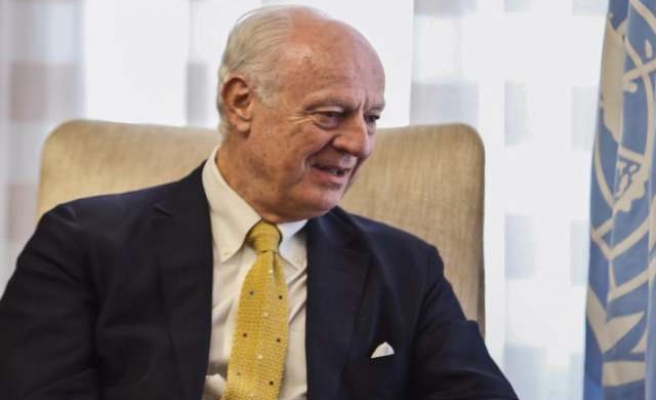 UN Special Envoy to Syria Staffan de Mistura on Wednesday reviewed the outcome of his recent meetings and contacts aimed at settling the Syrian crisis at a meeting in Cairo with Egyptian Foreign Minister Sameh Shoukri.

The UN envoy briefed Shoukri on his recent round of meetings and contacts with concerned parties in Syria, in the region and at the international level, Egyptian Foreign Ministry spokesman Badr Abdel-Ati said.

He also briefed the Egyptian foreign minister on what he believes should be done in future to find a political solution to the Syrian crisis, Abdel-Ati added in a statement.

He added that Shoukri had also briefed de Mistura on Egypt's view of recent developments in Syria, underlining the importance of finding a political solution.

Abdel-Ati said Shoukri had told the UN envoy that a political solution was the only way out of the crisis in Syria, noting that such a solution would guarantee the unity of Syrian territory and its regional stability in line with the legitimate aspirations of the Syrian people.

Shoukri encouraged de Mistura to maintain his efforts and contacts with Egypt with the aim of reaching a settlement of the Syrian crisis, which, he said, had negatively affected the situation in the entire Middle East region, according to Abdel-Ati.

An Egyptian Foreign Ministry delegation received the UN envoy at the airport, the sources added.

Last month, De Mistura presented an action plan at the UN Security Council aimed at halting the conflict in Syria.

According to the UN, the Syria conflict has claimed more than 150,000 lives since it began in March 2011, while nearly 11 million people in the war-torn country currently require humanitarian assistance.