The Muslim Brotherhood-led National Alliance for the Defense of Legitimacy, Morsi's main support bloc, has called for nationwide demonstrations to protest the ruling 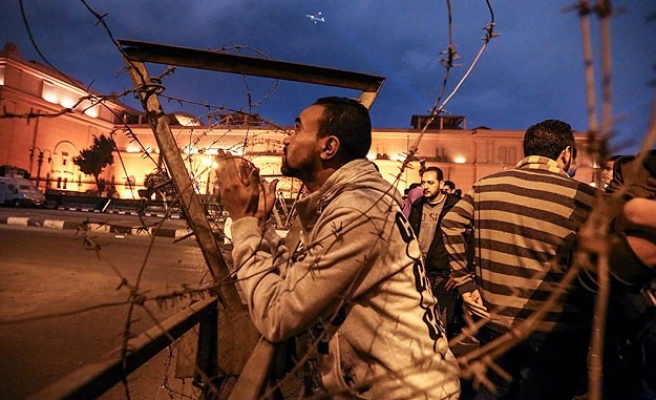 The Muslim Brotherhood-led National Alliance for the Defense of Legitimacy, Morsi's main support bloc, has called for nationwide demonstrations to protest the ruling.

The alliance, however, said it would avoid Cairo's flashpoint Tahrir Square, the epicenter of Egypt's 2011 popular uprising, where several youth-led protest groups plan to stage demonstrations the same day.

"Some groups calling for [Friday] protests fear a harsher security response if members of the alliance also converge on Tahrir," a source from the pro-Morsi bloc told The Anadolu Agency.

Last Saturday, a Cairo criminal court dropped murder charges against Mubarak, his former interior minister and six former security officials. The men had been charged with conspiring to kill unarmed protesters during the 2011 uprising, which had eventually led to Mubarak's ouster.

Following Saturday's court ruling, three demonstrators were killed near Tahrir Square – which was blocked to traffic – after security forces violently dispersed a protest by hundreds of Egyptians who rejected the court decision (which Egypt's prosecutor-general has since appealed).

Following the clashes, the Interior Ministry claimed that police had dispersed the Tahrir Square protest after supporters of Morsi's outlawed Muslim Brotherhood group had "infiltrated" the rally and assaulted security forces.

Six other groups that played roles in the 2011 uprising have called for Friday protests in Tahrir, including the April 6 youth movement and the "Strong Egypt" party.

"Groups that plan to protest on Friday are calling for a criminal retrial for Mubarak, along with fresh trials for ex-Mubarak regime officials who are politically responsible for crimes committed against the Egyptian people," April 6 coordinator Amr Ali told AA.

According to Ali, protest groups have not obtained permission from the authorities to stage their planned rallies, contravening a one-year-old law that requires a three-day notice ahead of any planned demonstration and which allows police to forcibly disperse unlicensed protests.

"If Mubarak supporters staged rallies to celebrate his acquittal without official permission, then why should we [have to obtain permission]?" Ali said.

He went on to assert that protesters had no intention of provoking security forces, nor were they planning to stage a sit-in in Tahrir Square.

Saturday's ruling exonerating Mubarak angered many Egyptians, with some relatives of slain protesters taking to the streets to protest the autocrat's acquittal and demand "retribution."

In late 2012, Mubarak and his former interior minister, Habib al-Adly, were both sentenced to 25 years in prison for ordering the murder of hundreds of unarmed demonstrators during the 18-day uprising in 2011.

But the court subsequently ordered a retrial after Mubarak's lawyers successfully appealed the sentence.