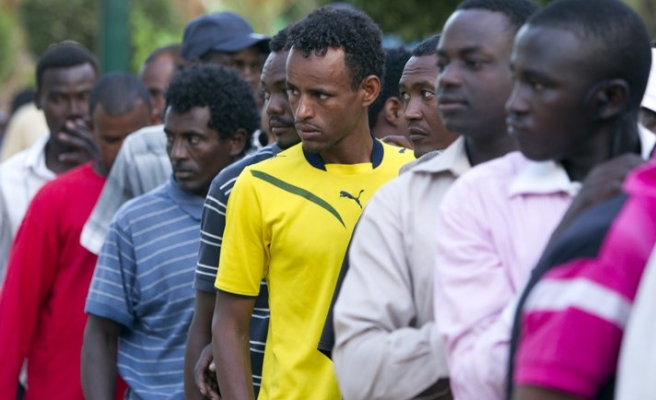 A few months ago, Mona Abu Bakr, a mother of three, could give her five-year-old daughter Eve the two glasses of milk she needs every day - but this is no longer the case.

Abu Bakr, a 39-year-old Sudanese refugee living in Cairo, can no longer afford the cost of two daily glasses of milk for her daughter.

Instead, she now gives little Eve only one glass a day. And she fears she soon won't even be able to afford this, as the cost of living mounts and life becomes increasingly difficult.

"Everything is becoming difficult to attain," Abu Bakr told the Anadolu Agency as she sat on her sofa in a rented apartment on the seventh floor of a dilapidated building in Kobri al-Khashab, a poor residential neighborhood in Giza.

"My family and I must forego most of our needs so that the little money we have can keep us afloat until the end of each month," she lamented.

Almost three years of post-revolution political turmoil and security deterioration in Egypt have deeply impacted the ability of millions of people in the country -- Egyptian and foreign alike -- to meet their basic needs.

Africans -- seeking official refugee status in Egypt to escape wars, bloodshed and poverty back home -- are among the most vulnerable.

Those 150 pounds, along with the money she used to earn working as a housemaid near the Ittihadiya presidential palace in northeast Cairo, barely kept her family afloat.

"We only want the basics, no more," expressed Abu Bakr.

"We don't want to lead a rich life, we only want enough to keep us going."

According to independent NGOs, hundreds of thousands of African refugees are living in Egypt.

The UNHCR, for its part, says that some 56,700 refugees -- including 10,000 asylum-seekers from Syria -- were registered with it in January of this year.

In 2011 and 2012, the UNHCR reported an increase in the registration of new asylum-seekers in Egypt, especially those coming from Sudan and South Sudan.

The tens of thousands of refugees who fail to obtain UN support, particularly single Africans, must fend for themselves in the absence of local laws allowing them to work in Egypt.

Many of them can be seen in Egypt's markets, hawking wares from leather products to perfume, ointments and foodstuffs.

They can be found in busy squares in the center of Cairo, like Opera Square near the densely-populated middle-class Attaba district.

Many female African refugees end up working as maids in Egyptian households.

The situation for refugees has become even worse over the last three months, since Egypt's military establishment ousted Mohamed Morsi -- the country's first democratically-elected leader -- amid massive and well-coordinated protests against his presidency that began on June 30.

"Few people are aware of the catastrophe that has befallen Egypt since the [June 30] revolution," Bashir Suleiman, a researcher from the Sudan Contemporary Center for Development (SCCD), a Cairo-based NGO that lobbies for refugee rights, told the AA.

Refugees, he added, "are among the most vulnerable to the political, economic or security changes that occur in their host countries."

In the past, Egypt had been known for welcoming refugees, especially when the country enjoyed a degree of security and political stability. Now, however, that appears to have changed.

"When there's [economic, political or security] deterioration in a given country, refugees are the most affected," Tareg Nour, head of Tadamon, a Cairo-based NGO devoted to refugee issues, told the AA.

"Refugees do not have regular sources of income," he added. "That's why they are highly sensitive to economic and security problems."

In recent months, Nour has received an increasing number of applications for financial support from refugees.

He says the number of applications has almost trebled in recent months, reflecting the dire straits that many refugees in Egypt currently find themselves in.

But the deteriorating financial conditions have also taken their toll on charitable contributions that Nour's NGO receives from local and international donors.

This means fewer resources to help refugees, which has forced him to turn away many who have come to him for help.

"I really can't do anything about it," Nour lamented. "There are too many people who need help and money is proving very difficult to get hold of."

Abu Bakr, like many refugees, had to make further adjustments to cope with the deteriorating situation in Egypt and her evaporating financial resources.

But with political demonstrations and clashes in the area preventing her from going to work, a bedridden husband who requires constant care and skyrocketing food prices, Abu Bakr is no longer able to put enough food on the table.

"We have had to reduce the number of meals we eat every day to two," she sobbed.

"My husband must do without some of his medication, since we can't afford it."

She recieves 800 pound and pays 650 in rent - this is a problem the world over, and stifles the poor from ever getting ahead and contributing to growth, of themselves and the wider community.