Former intelligence chief Mowafi apparently had knowledge of a supposed plot to assassinate President Morsi; dismissal of generals followed leak of information back to Morsi. 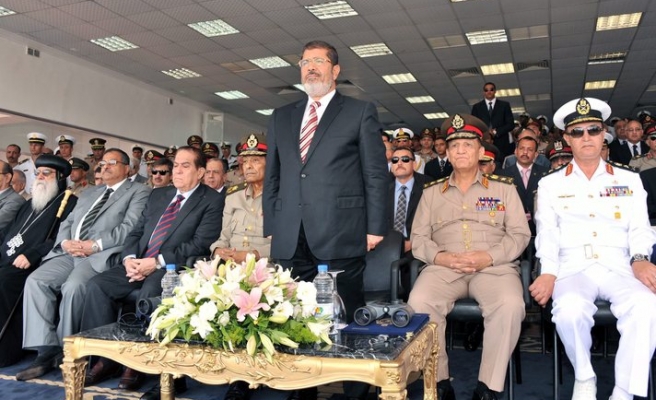 Egypt President dismissed top army officials to prevent a military coup that was planned to take place in late August, Egyptian security officials have been quoted as saying by the country's media outlets on Tuesday, reported on Haaretz.

According to the reports, Egyptian President Mohammad Morsi was alerted to the plot's existence by military officials, who informed the newly elected leader that plans were being drafted within the army to takeover power in Egypt and even assassinate Morsi himself during the funeral of Egyptian officers killed in the recent Sinai attack.

Moreover, the reports allege that not only did head of intelligence Morad Mowafi, who was fired prior to the dismissal of the army's elite, know about these plans, but that he was also given the names of some of its would be perpetrators.

His only "sin," it appears, was that he chose to disclose this information to now former Defense Minister Gen. Hussein Tantawi, as opposed to going straight to President Morsi, who is legally defined as the commander-in-chief. Reportedly, Morsi was especially angered by the fact that Tantawi didn't share the intelligence reports with him.

Fears that Tantawi was plotting a scheme against the Muslim Brotherhood-led administration were apparently bolstered when the defense minister appointed Major General Hamdi Badin, who served as commander of Egypt's military police until fired by Morsi, as his special aide.

Meanwhile, Morsi allegedly received reports describing a planned organization of "militias," geared at instigating riots in Egypt's streets, and claiming that they received promises from "army officers that the military will stand behind them."

Reports of the alleged coup are surfacing in wake of the very dismissal of Tantawi and army chief Sami Enan, as well as the manner in which the firing took place and the choice of their replacements.

Egyptian sources indicated that Tantawi and Enan were unaware of Morsi's intent to remove them, and that the Egyptian president swore in Enan's replacement, General Abdel-Fattah El-Sisi, even before of notifying both Tantawi and Enan of their dismissal.

Before making his announcement, Morsi first told his aide to notify the top military officials to stay in the presidential palace and "await an important meeting with the president." Their cell phones were removed and a heavy guard was placed near the palace as well as near their respected offices.

Following his delivering of their notice of dismissal, Morsi ordered guards to watch over their homes and oversee their movements. According to one report, they were forbidden from leaving the country, and may even be investigated for their actions during the regime of ousted President Hosni Mubarak.