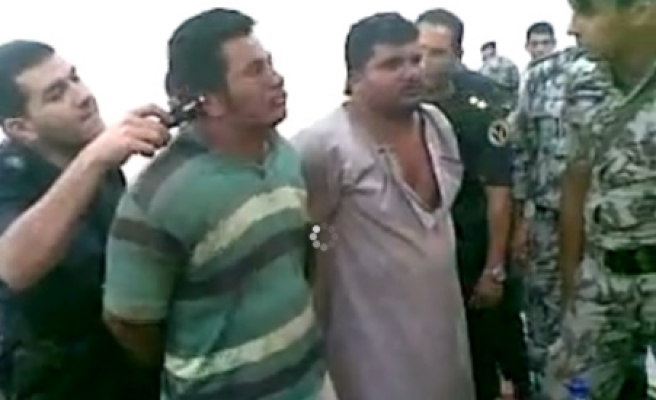 Egypt's military prosecutors launched an investigation into a case of abuse of detainees at a police station north of Cairo after footage of an alleged assault was shown on social networking sites, state news agency MENA reported on Wednesday.

The footage, reminiscent of alleged police abuse under ousted President Hosni Mubarak, showed soldiers and police officers slapping and hitting two handcuffed detainees. One police officer repeatedly zapped the detainees in the ears with a taser.

"The head of the military judiciary received formal complaints that some army and police officers have assaulted some people accused of trading in arms and ammunition at the al-Kurdi police station in Menyet al-Nasr in Daqahliyah province," MENA said.

"He immediately decided to summon the officers to stand at the military prosecution for an investigation," it said.

Egypt's state-run al-Ahram said that the head of the ruling military council, Field Marshal Mohamed Hussein Tantawi, ordered that "full legal action" be taken against the officers if the actions attributed to them were proven to be true.

Rights groups say that suspects were routinely beaten and tortured by police officers during the 30 years of Mubarak's rule before he was forced out in a popular uprising in February.

The death of an Egyptian activist last year after two policemen dragged him from an internet cafe in the Mediterranean port city of Alexandria and beat him helped spark the uprising that deposed Mubarak.